Thrun the troll is returning to Magic: The Gathering’s Standard format through Phyrexia: All Will Be One as Thrun, Breaker of Silence, a five-drop Mono-Green creature that is extremely difficult to remove from the battlefield.

Thrun, the Last Troll and legendary shaman of the plane formerly known as Mirrodin was first printed in MTG through the Mirrodin Besieged set. The legendary creature returns in the Phyrexia: All Will Be One (ONE) set and the shaman has grown in power. Revealed during the MTGWeekly stream today, Thrun, Breaker of Silence is a five-drop Mono-Green creature with 5/5 stats and a healthy amount of protection. 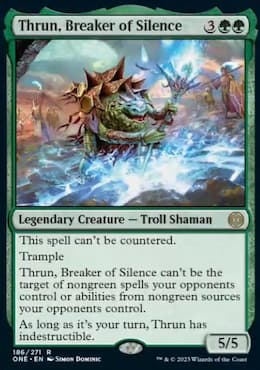 Mass board wipe removal can remove Thrun, Breaker of Silence from the battlefield, as can multicolor removal spells that have the color Green in them. But for the most part, removing the troll from play is quite difficult since Thrun has protection against all MTG colors except Green, can’t be countered upon casting, and has Indestructible when it is your turn.

Thrun, Breaker of Silence is a bomb in ONE Limited and will likely see some play within other MTG formats as well. Five mana for a 5/5 creature with Trample that is difficult to remove stops most attacking creatures while pressuring opponents on your turn.

Players can test out Thrun, Breaker of Silence during the ONE prerelease events that begin on Feb. 3 or through the digital launch of Phyrexia: All Will Be One on Feb. 7.