MTG planeswalker Nahiri weakened through Compleation in All Will Be One

Red and White Aggro might give Nahiri the cold shoulder.

Wizards of the Coast is Compleating planeswalkers like it’s the newest fashion in Magic: The Gathering, with Nahiri being the next confirmed Gatewatch member to fall in Phyrexia: All Will Be One.

The Gatewatch has officially invaded the plane of New Phyrexia, hoping to stop a Multiverse war that is surely coming. The official spoiler season for the Phyrexia: All Will Be One (ONE) set doesn’t start until Jan. 17 but WotC has already previewed two Compleated MTG planeswalkers. The first to fall to Phyrexian oil was Lukka yesterday, followed by Nahiri today. 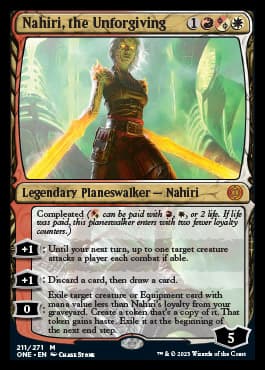 Nahiri is typically a Red and White planeswalker that synergizes with Equipment. Her planeswalker card in Zendikar Rising was a four-drop that was flexible, created protection, and was able to deal direct damage. Upon being Compleated by the Phyrexians, her ONE version feels much weaker and less flexible than her ZNR version.

Both plus one abilities that Nahiri, the Unforgiving have are poor options in the BRO Standard meta. Gaining card advantage can be accomplished without spending four mana and forcing a creature to attack each turn doesn’t have any advantages that we know of at this time.

The strongest loyalty ability Nahiri has after getting Compleated is her zero-cost one, able to reanimate a creature or Equipment from the graveyard and put it to use for that turn only. It’s still not worth four mana and it leaves her vulnerable as none of Nahiri’s loyalty abilities protect her. And should players choose to pay the Phyrexian cost instead, the mana value of what’s getting reanimated is reduced to two or less.

Players can test out Nahiri and all the Compleated MTG planeswalkers with the digital release of ONE on Feb. 7 and at prerelease events that start on Feb. 3.