MTG Phyrexia: All Will Be One delivers an unprecedented planeswalker for Red decks

Magic: The Gathering is sprinting into 2023 with the second half of a multi-set story involving a multiversal conflict with the dreaded Phyrexians.

The next chapter in this story comes on Feb. 10 with the release of Phyrexia: All Will Be One. The set is still two months away, but that didnt stop Wizards of the Coast from giving fans some preview cards on this weeks Weekly MTG stream.

Alongside a new Elesh Norn and a reprint of Phyrexian Obliterator, one of the sets new planeswalkers was spoiled. As Magic has grown, planeswalker designs have become increasingly focused on supporting specific archetypes rather than pushing to make the next game-breaking card.

Koth is returning as the games first planeswalker card that cares about Mountains. This is an interesting twist on what Red planeswalker cards do and packs plenty of value in a four-mana package. 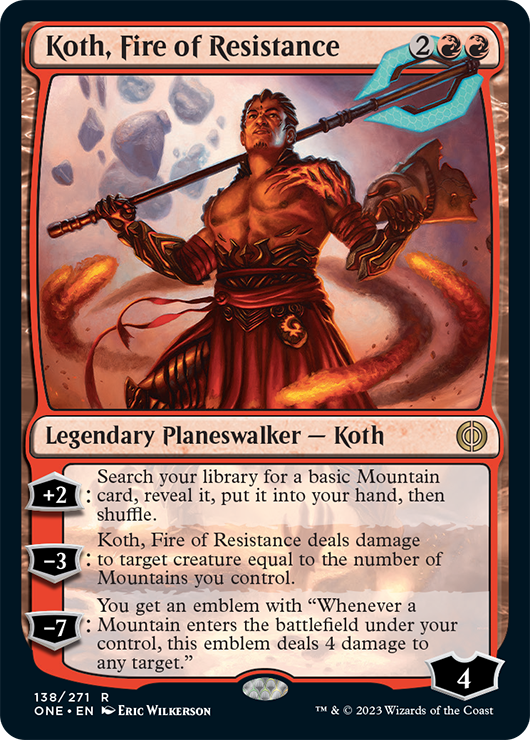 Big Red is an emerging deck in Standard thats on the fringes, looking for one or two key pieces to take over the format. Koth could be a great value piece that pushes the archetype into the limelight. Theres plenty of value in Koths three abilities that are signifiers of typical good planeswalkers.

This is the first Mountains-matters planeswalker in Magic and explores an interesting design space. The +2 ability is excellent. It guarantees that youll hit your land drops to help play the big-mana finishers on curve. Its an invaluable ability that makes Koth strong in a list that turns on at five-mana or above. The -3 is a nice piece of removal that scales with the game. Itll likely kill anything that the opponent controls.

The ultimate is a game-winning ability. Dealing four damage to anything whenever a Mountain enters the battlefield will pretty easily close out a match. Outside of a high mana value mono-Red strategy, its hard to see where Koth will find a home in Standard. A two-color deck will struggle to consistently take advantage of what Koth provides. But there is a chance it can thrive in a Superfriends deck that looks to use Koth as essentially a four-mana removal spell and a way to smooth out land drops.