Attack and create an army, leaving your opponent with their hands tied.

Wizards of the Coast has designed a Magic: The Gathering card called Myrel, Shield of Argive, a Mythic Rare that supports soldier tribal in The Brothers’ War and provides hate toward archetypes that like to cast spells on their opponent’s turn.

Slated to release digitally on Nov. 15, The Brothers’ War contains several human soldier cards in the colors White and Blue that are building out a soldier tribal archetype. The first to drop was Harbin, Vanguard Aviator, followed by Siege Veteran. Earlier today, Skystrike Officer was revealed. And then came the official BRO spoiler Myrel, Shield of Argive, following an incorrect leak that was circulating the internet yesterday. 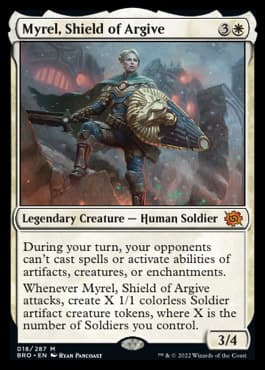 Soldier tribal Commander players will want Myrel, Shield of Argive within their builds since the human soldier prevents all opponents from casting or activating abilities when it isn’t their turn. This prevents Instant spells and activations from disrupting the board state while your army grows substantially.

Myrel, Shield of Argive has a similar ability to Adeline, Resplendent Cathar, pumping out tokens upon attacking, which not only makes her an ideal choice in Commander but within the Standard Constructed format as well.

Synergizing with Harbin, Vanguard Aviator, all the tokens created by Myrel will gain +1/+1 and Flying as long as five or more soldiers are attacking. In conjunction with Siege Veteran, who creates a soldier token whenever a soldier dies and pumps a target creature with a +1/+1 counter at the beginning of combat, the soldier tribal UW build is looking very strong prior to all BRO spoilers dropping.

Players can test out the soldier tribal UW deck and all the newest MTG cards when The Brothers’ War globally releases on Nov. 18. Prerelease events start on Nov. 11 and the digital launch will take place on Nov. 15.