MTG Mondrak, Glory Dominus sings Phyrexia praises in All Will Be One

Sing to the glory of perfection.

Each of the five Praetors on the Magic: The Gathering plane of Phyrexia has a Dominus erected to honor them, with Elesh Norn’s Dominus singing All Will Be One praise.

New to the landscape of the plane formerly known as Mirrodin in the Phyrexia: All Will Be One (ONE) set are a cycle of Dominus. These structures are living entities created by Phyrexian Aspirants who have been perfected, although the objective of the Dominus remains a mystery. The Dominus that have been created for each of the five Praetors are a part of the Phyrexian landscape, which like the plane has been Compleated.

Mondrak, Glory Dominus is the Dominus that honors Elesh Norn. It is called the singing Dominus, containing multiple mouths around the structure. Since the Dominus are living, they are classified as Phyrexian Horrors and are legendary in MTG. 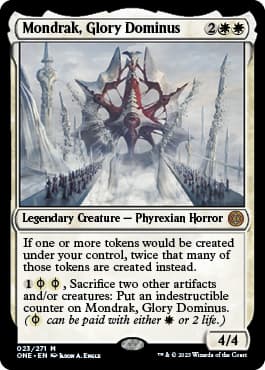 The color White in Standard already has several token generators that synergize with the MTG color Green and the legendary Jinnie Fay, Jetmir’s Second. And based on ONE spoilers from the preview stream, the color White will have multiple token engines like Skrelv’s Hive and White Sun’s Twilight.

Players can also opt to use Mondrak, Glory Dominus in builds that produce Artifact tokens since the Dominus can protect itself by sacrificing those tokens in addition to an activated ability cost.

Mondrak, Glory Dominus, and the remaining cycle of Dominus are available through the Phyrexia: All Will Be One prerelease event that begins on Friday, Feb. 3 and through the digital release of the MTG set on Tuesday, Feb. 7.