Scheduled to release globally on Sept. 9, Dominaria United (DMU) will contain stompy Phyrexian creatures and cards like Keldon Flamesage to potentially deal with them. The Mono-Red three-drop uses the Enlist mechanic to increase its power upon attacking, increasing the mana value of an Instant or Sorcery spell that it fetches and its controller can cast for free. 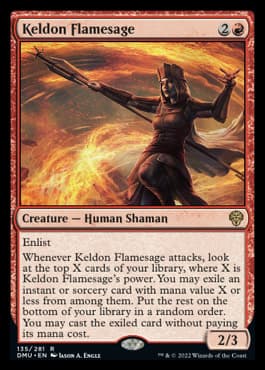 Several archetypes within the Standard format will use Keldon Flamesage, from Izzet spells matter decks to Mono-Red and Red/White Aggro. Decks that contain low-cost spells and creatures will likely benefit the most from Keldon Flamesage, reducing the chance of whiffing upon attacking.

Casting spells for free is powerful. Using the Enlist mechanic can potentially increase Keldon Famesage’s power by at least three, allowing players to look at the top five cards and find a spell that costs five or less to cast for free. The human shaman will likely see gameplay in various MTG formats, within tournament and meme combo decks.

Players can test out Keldon Flamesage with the digital release of DMU on Sept. 1 or at prerelease events scheduled to take place from Sept. 2 to 8.

Latest comments
No comments yet
Why not be the first to comment?
Featured news
MTG10 hours ago