MTG Kaya planeswalker buffs Control decks in Phyrexia: All Will Be One

Kaya returns to Standard with a planeswalker card that's worthy of her name.

Planeswalkers are falling to Phyrexian oil in the new Magic: The Gathering set, but Kaya remains a foundation of the Gatewatch through her new Phyrexia: All Will Be One planeswalker card.

A total of 10 planeswalkers are in the upcoming Standard-legal Magic set Phyrexia: All Will Be One (ONE), in which five are Compleated. Kaya, Intangible Slayer avoids the Phyrexian oil bath on the plane of New Phyrexia, showcasing a powerful planeswalker card in the MTG colors Black and White.

Kaya has a reputation to uphold within MTG, able to deal with opponent’s creatures while also providing value to her controller. The ONE planeswalker versionKaya, Intangible Slayerlives up to what players expect from the WB Gatewatch member, despite its expensive mana cost. 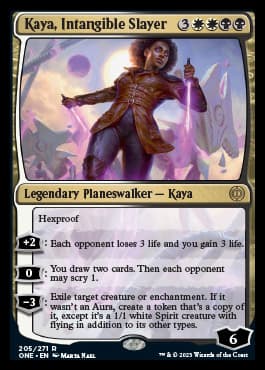 Having Hexproof on a planeswalker is extremely strong in any Magic format. Kaya, Intangible Slayer is a seven-cost planeswalker that won’t slot into many creature/tempo builds because of her cost but will find homes within WB Control decks.

Kaya’s minus-three is her strongest ability and, with her plus-two ability, is able to activate it at least every other turn. Any creature or Enchantment exiled becomes a 1/1 Flying token under your control, in addition to its other types. This provides protection while also putting an evasive unit on the board.

Within a Control build, Kaya will put the finishing blows on an opponent, whether it’s through her copy spirit token or simply by draining an opponent for their final three life points.

Players can test out Kaya and all the other MTG planeswalkers in the ONE set when it’s digitally released on Feb. 7.