A horde of goblins wants to wreck your opponent's deck.

Mono-Red goblins have been a staple deck in Magic: The Gathering for some time and will return to Standard with the release of Dominaria United through a goblin lord called Rundvelt Hordemaster.

A cycle of two-drop lords with a rarity of Rare is coming to MTG with the release of Dominaria United (DMU) on Sept. 9. Lords pump up specific creature-type stats by +1/+1 while typically having an additional ability or effect as well. The new goblin lord for DMU, revealed today by Jim Davis, is Rundvelt Hordemaster in the color Red.

Rundvelt Hordemaster is the first MTG goblin lord that has a mana cost of two mana. 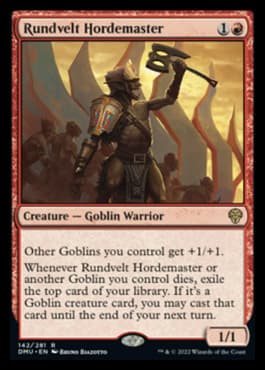 The new goblin lord has a slight downside in that it only has a power and toughness of 1/1. It does not pump up its own stats but does increase the power and toughness of other goblins. Rundvelt Hordemaster makes up for its low stats by serving as a goblin card engine, though, continually pulling goblins from the top of your library that can get cast anytime before the end of your next turn.

Having a goblin lord in Standard is neat, although it’s unknown how well it will perform following the 2022 Standard rotation. Players in other MTG formats will definitely find a home for Rundvelt Hordemaster, whether it’s in digital formats like Historic or tabletop formats like Modern and Pioneer.

Players can begin testing and crafting with Rundvelt Hordemaster, the goblin lord, with the digital release of Dominaria United on Sept. 1. A global launch is scheduled to take place on Sept. 9.