Wizards of the Coast is continuing to pump up power levels within the Magic: The Gathering color Black through Gixian Puppeteer, a Brothers’ War spoiler that has big potential within the Standard format.

The color Black is already one of the strongest MTG colors in Standard, and it will get even stronger on Nov. 18 with the global release of The Brothers’ War. Revealed today by CafeDaum, Gixian Puppeteer is a Rare Phyrexian warlock that has drain and gain strategies built into its passive. And as an added bonus, the four-drop also has a reanimation ability upon leaving the battlefield. 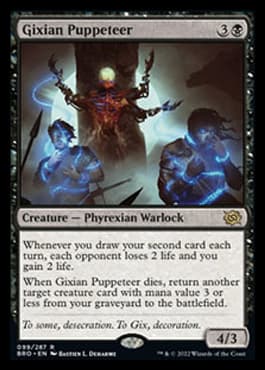 The Phyrexian warlock pairs nicely with Gix, Yawgmoth Praetor, another BRO spoiler that dropped last week who draws a card upon dealing combat damage to your opponent. But Gixian Puppeteer isn’t relegated just to Mono-Black.

Both White and Green have plenty of card draw engines, along with cheap creatures that Gixian Puppeteer can reanimate from the graveyard upon dying. The Phyrexian warlock will definitely have an impact on the Standard meta, along with Commander and other Magic formats.

Players can test out Gixian Puppeteer through prerelease events that start on Nov. 11. The digital launch for The Brothers’ War will take place on Nov. 15.