Lifelink strategies within Magic: The Gathering formats Alchemy and Historic will gain Ethereal Escort with the release of A22.

Scheduled to release on Dec. 9 with the launch of Alchemy, a new Standard format on MTG Arena, Ethereal Escort is a spirit that gives anything the keyword Lifelink. Revealed by Amy the Amazonian on Twitter today, the spirit is a three-drop Mono-White 3/3 that has Lifelink. Upon entering the battlefield or attacking, it gives any card in your hand the keyword Lifelink. 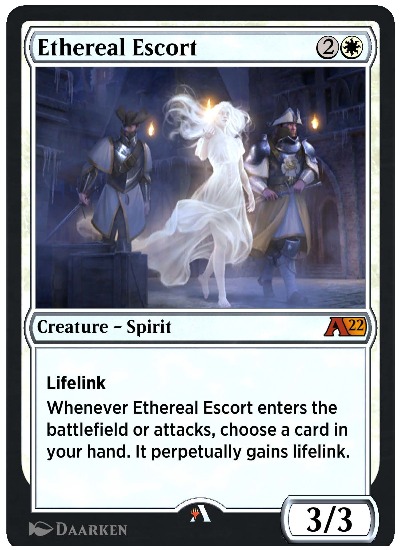 Perpetually is an MTG Arena digital-only mechanic that essentially means permanently. Ethereal Escort has the power to give your planeswalkers in hand Lifelink or even Instant burn spells. With spells like Burn Down the House that apply five damage to each creature on the battlefield, that’s five life gained for each of those destroyed creatures.

The A22 spirit has decent stats as a three-drop 3/3 with Lifelink. Stats like these are hard to come by on Magic cards. And Ethereal Escort has the added bonus of giving any card in your hand Lifelink, all at a cost of only three mana. With each attack, the value you get from the A22 spirit just keeps getting better.

Ethereal Escort is a digital-only card in Magic, playable within the Alchemy and Historic formats. Players can test out the Mono-White spirit when it’s released on Dec. 9.

Latest comments
No comments yet
Why not be the first to comment?
Featured news
MTG26 minutes ago

How to catch MTG Kamigawa: Neon Dynasty spoilers when they drop