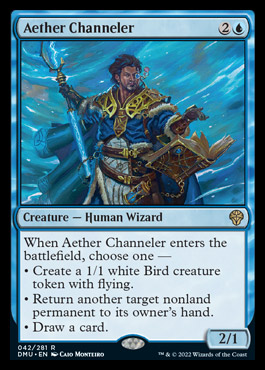 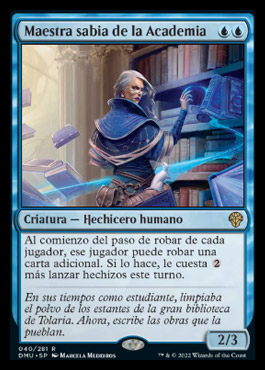 A return to Dominaria, the home of the Tolarian Academy, means the return of powerful Wizards, two of which were revealed during the penultimate day of Dominara United spoilers.

Wizards are generally found in the Blue and Red colors and focus on disruptive abilities and enter the battlefield effects. With Magic‘s power level increase over the past few years, the Wizards of Dominara United are much stronger than those from the last trip to the plane in 2018.

Dominaria United releases digitally on Sept. 1, followed by a tabletop release on Sept. 9. When the set enters Standard, there’s a potential Wizard cards will have an immediate impact on Magic‘s various formats.

Wizard tribal is a strategy that could emerge when the current Dominaria story is settled. Academy Loremaster is an interesting card that rewards draw-go control decks that don’t want to cast any spells on their turn.

The ability is risky because it gives the opponent an extra card per turn. This is balanced out by taxing the spells they cast on their turn. It is optional, however. The opponent can take advantage of the extra cards to find an answer or a win condition, which is a risky gamble to play.

In the right shell, Academy Loremaster should be more beneficial to you than the opponent. In a deck instant-speed tempo deck packed with flash creatures and counterspells, Academy Loremaster’s downside doesn’t affect you at all.

Tempo decks thrive off disrupting the opponent’s curve. Sure, the opponent will get extra cards, but that won’t matter when they can’t resolve spells and are playing the entire game from behind.

Academy Loremaster’s worth will be determined by the metagame. In a control-heavy metagame, this card is unplayable in the main deck and will be in the sideboard for certain matchups. If Standard evolves into a midrange format, Academy Loremaster could be one of the best cards in a Mono-Blue Tempo mainboard.

Aether Channeler is a versatile Magic card. The 2/1 body is fragile but it has the ability to adjust to the state of the game. Aether Channeler can be a solid option for Mono-Blue Tempo decks in the three-mana slot.

Creating a 1/1 flying body will be a good way to apply pressure. Bouncing the opponent’s turn three play is a major tempo swing. Drawing a card is always good and can help you continue to hit Land drops.

The ability gets better in eternal formats when combined with cards like Harmonic Prodigy and Naban, Dean Of Iteration. These cards can double up on Aether Channeler’s trigger. Look for this card to be a staple in Wizard-tribal Commander lists and possibly have an impact on 60-card formats.