The lord cycle continues to impress.

Dominaria United has introduced a cycle of tribal lords with powerful upsides that will be staples in Commander and may see play in eternal formats.

On the second-to-last day of Dominaria United spoilers, a new Cleric lord was revealed that powers up Black-based decks with an excellent tutor ability.

Cleric tribal is a supported archetype in MTG Commander with 2,997 decks in the EDHRec database. The tribe is primarily a W/B archetype. These decks look to build a large battlefield with cards that chain abilities together.

The newest addition, Shadow-Rite Priest, will give Cleric decks some inevitability by allowing them to consistently find win conditions. 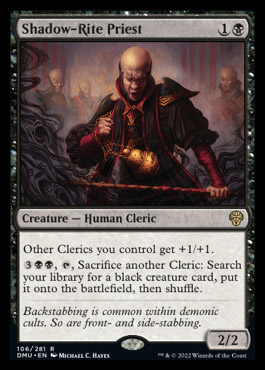 Shadow-Rite Priest is an excellent two-mana play in the formidable snowball list. Over the past year in Standard, Clerics was a solid mid-tier archetype that was largely supported by cards from Zendikar Rising. With that set rotating out of Standard, Clerics will be severely hurt. But there’s a chance the strategy can take a new form in Standard.

In Commander, Shadow-Rite Priest becomes one of the best cards in a B/W Clerics build around Orah, Skyclave Hierophant. Its ability to immediately search up any Black creature for five mana is powerful. The ability also synergizes with Orah’s triggered ability.

Tutoring out a win condition directly onto the battlefield is one way to close out a game of Commander. Depending on how you choose to build your deck, this play can be made more consistent with tutors that can find Shadow-Rite Priest.

Dominaria United releases on Magic Arena and Magic Online on Sept. 1. The tabletop launch will take place on Sept. 9.