Soar into battle on the souls of allies.

Legendary Artifact vehicles have a new look in Magic: The Gathering following the Phyrexian invasion within Dominaira United, showcasing a Compleated Weatherlight that doesn’t require a crew to fly.

Scheduled to release digitally on Sept. 1, Dominaria United highlights the second Phyrexian invasion on the beloved plane. Planeswalkers have turned into sleeper agents and the greatest skyship on Dominaria into a Phyrexian war machine. Featuring a low casting cost and no crew cost, the Weatherlight Compleated will likely become a highly sought-after Mythic Rare in Dominaria United. 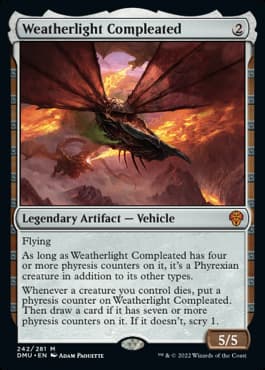 The Weatherlight Compleated is a powerful vehicle that requires the dead to essentially become a creature that can defend and attack. With a cost of only two mana of any color, players can drop the Legendary Artifact early, rack up some creature deaths, and have the skyship crewed by the midgame.

In addition to having a unique crew cost, Weatherlight Compleated also serves to provide card advantage. Having Scry one for each creature’s death is a powerful ability. Once seven or more of your creatures have perished and racked up Phyresis counters with the legendary Artifact on the battlefield, the Skyship starts drawing a card every time a creature you control dies.

Sacrifice decks in Black and Red can accelerate how fast the Weatherlight Compleated transforms into a Phyrexian creature while also drawing cards. The Artifact should also do well in Mono-Black Standard decks that rely upon cards like The Meathook Massacre.

Players can test out Weatherlight Compleated with the digital release of Dominaria United on Sept. 1 or at the global launch that is scheduled to take place on Sept. 9.