Tap for mana of any color or to protect a legendary.

Wizards of the Coast continues to support the Magic: The Gathering Commander format through Standard-legal sets with the Dominara United spoiler Plaza of Heroes.

The Commander format in MTG will get plenty of support through Dominaria United (DMU) release on Sept. 9. A cycle within the Standard-legal set will showcase 10 Rare dual-colored legendaries that support Draft archetypes, along with a cycle of 10 Mythic Rare tricolor legendary creatures. Today’s DMU spoilers introduced Plaza of Heroes, revealed by Corey Baumeister, a module land that supports and protects legendary creatures. 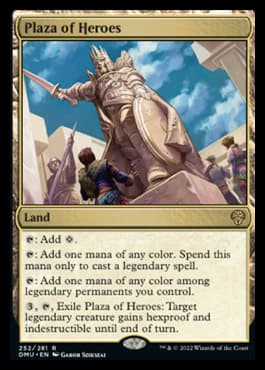 The DMU Plaza of Heroes card will likely become a staple within the MTG Commander format. Mana is always an issue in Commander, and Plaza of Heroes provides a ton of flexibility, especially in decks that have a commander with three or more colors. And as a bonus, players can sacrifice the land at a cost and provide a key legendary creature Hexproof and Indestructible for that turn.

Depending on the layout of DMU, Plaza of Heroes may even see gameplay in the Standard format. And it will certainly see play in MTG formats like Historic, Pioneer, and Explorer.

Players can test out Plaza of Heroes in their Commander decks with the global release of DMU on Sept. 9. Digital players can start including it in various builds as early as Sept. 1.