MTG Cankerbloom ONE spoiler has Thrashing Brontodon vibes with Proliferate

Don't sleep on the Phyrexian fungus.

Artifacts and Enchantments are everywhere in the Standard format, and Cankerbloom from Phyrexia: All Will Be One in the color Green provides the necessary hate toward the Magic: The Gathering types while also having Proliferate.

The return of Proliferate is a big deal in Phyrexia: All Will Be One, especially within the Limited format. Both Poison and Oil counters have sub-themes in the new MTG set, in addition to +1/+1 and Charge counters. Revealed today during the ONE spoiler season was Cankerbloom, a two-drop 3/2 creature in Green that can destroy an Artifact or Enchantment upon sacrificing itself, or Proliferate. 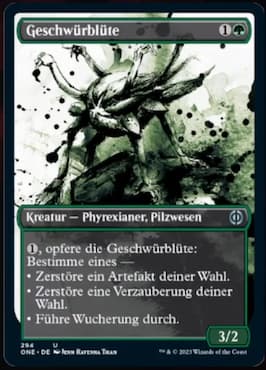 Similar to Thrashing Brontodon, which saw a decent amount of Constructed play during its time in Standard, Cankerbloom can block an attacker and sacrifice itself to trigger one of its abilities, all while preventing damage from the attacking creature.

The Phyrexian Fungus doesn’t have the same stats as Thrashing Brontodon, which may reduce the card’s playability in Standard, but Cankerbloom can Proliferate whereas the dinosaur could not.  Within the ONE Limited format, Cankerbloom is a solid two-drop with a ton of value and versatility.

Players can test out Cankerbloom when the ONE set launches digitally on Feb. 7 or at prerelease events that start on Feb. 3.