Some of the most iconic land cards in Magic: The Gathering are the three Urza lands from Antiquities, known by the community as Tron lands.

Urza’s Power Plant, Urza’s Mine, and Urza’s Mine are three cards that can quickly accelerate the user’s mana when all three are on the battlefield together. The power of these lands has spawned a full archetype built around them in eternal formats known as Tron. Modern and Legacy Tron decks have been a part of these formats since their inception.

Magic‘s newest set, Brother’s War, is a look back at the conflict between Urza and Mishra and showcases a pivotal time in Dominaria’s history. This setting allows for cards to call back to classic designs and characters.

One of the eight set booster Commander cards is a new Urza’s land that will play well with the other Tron pieces. 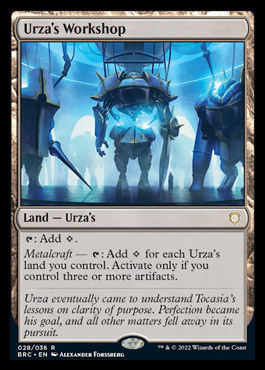 This is a neat card that will be legal in Commander and Legacy. Commander decks that run plenty of Artifacts will likely want to run Urza’s Workshop. In decks without intense color requirements, the three Tron lands are a powerful source of mana acceleration. Due to the 100-card singleton nature of Commander, it’s harder to assemble Tron, but Urza’s Workshop can provide value even if you control one piece of the puzzle.

If you only have Urza’s Power Plant on the battlefield, an Urza’s Workshop can tap for two mana. That’s not too bad. With full Tron assembled, Urza’s Workshop will tap for four mana. There’s no reason for one or two-color Artifact lists not to run Urza’s Workshop alongside its Tron package.

Its Legacy playability is questionable, but in a format known for ingenious deck builders, there’s a chance it can show up. It’s a low-effort land that can provide extra value when Tron is fully assembled. It’s a bit of a win-more card in something like Legacy. Don’t expect it to show up, but there’s a chance because of its metalcraft ability.

Players will be able to get their hands on Urza’s Workshop when Brother’s War is released on Nov. 18.