Two new The Brothers’ War spoilers from Magic30 today showcase the power behind Artifacts in opposite archetypes.

Artifacts are a primary focus in The Brothers’ War set, scheduled to first release through prerelease events that start on Nov. 11. Powering the Artifacts within the new Standard-legal set are Powerstones, able to create mana to cast Artifacts or get used for other sources like activated mana.

Both The Stone Brain and Transmogrant’s Crown, revealed at Magic30 during the future tabletop panel, showcase how Powerstones will play a role in BRO, along with the possible power levels of Artifacts within Aggro and Control archetypes. 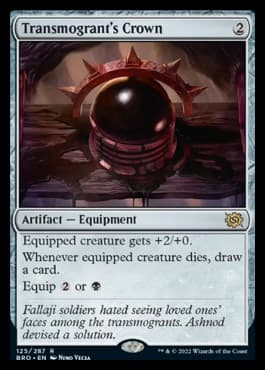 It’s been a season since the Standard format had playable Equipment. Transmogrant’s Crown, especially within a deck using the color Black, is cheap to equip, provides card advantage, and buffs up the power level of attacking creatures. The Artifact Equipment will also see play in a variety of other Magic formats. 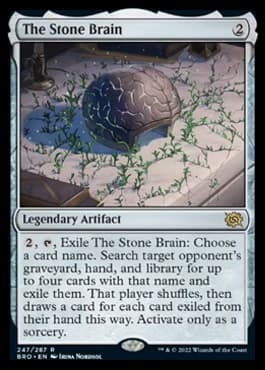 Control players across multiple Magic formats will likely include a copy or two of The Stone Brain within their sideboard. The legendary Artifact will disrupt combo strategies and graveyard and reanimation shenanigans.

Players can test out both Artifacts within The Brothers’ War set when it globally releases on Nov. 18 and digitally launches on Nov. 15.