Wizards of the Coast dropped another Prototype Artifact at the Magic: World Championship today, showcasing a nine-drop Skitterbeam Battalion.

The upcoming Standard-legal Brothers’ War set, scheduled to hit local game stores for prerelease events starting on Nov. 11, will feature giant Mech Artifacts and a new MTG Prototype mechanic. Cards with Prototype have the option to get played at a lower casting cost, adjusting only the baseline stats, or at full cost. Skitterbeam Battalion is an Artifact creature is a Construct that wants to go wide with copies of itself. 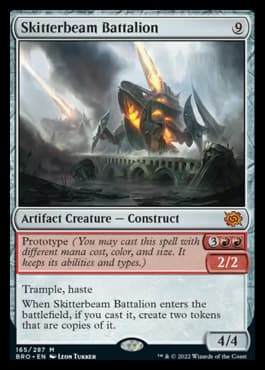 The Prototype of Skitterbeam Battalion is super strong, producing three creatures with Trample and Haste for only five total mana. And the Artifact gets even better at nine mana, especially with Powerstones scattered throughout the BRO set.

Aggressive decks can take advantage of the board state provided by Skitterbeam Battalion, while Tempo decks can use it to synergize with Blue spells like Urza’s Command. And the super risky Limited players can use it to pump up a target creature on the battlefield through the Green, and White BRO signpost revealed today, Yotian Dissident.

Players can test out Skitterbeam Battalion during BRO prerelease events that start on Nov. 11. The digital launch for The Brothers’ War will take place on Nov. 15, followed by the global release on Nov. 18.