Limited is starting to take shape.

Coming off the well-regarded Dominaria United, the Limited format in Magic: The Gathering’s next set, Brother’s War, has some lofty expectations to live up to.

Unlike Dominaria United, Brother’s War will have a heavy Artifact focus, with many decks likely relying on valuable colorless cards or flexible Artifacts with prototype. Each color pair will synergize with Artifacts differently, which will be the key distinction between archetypes in the set.

Yotian Dissident provides insight into what the Green and White color pair is looking to do. The strategy likely wants to go wide with small Creatures then turn them into dangerous threats through buffs like +1/+1 counters. 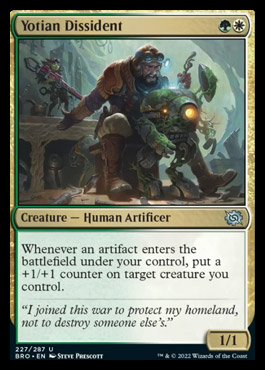 This is a solid Creature that’s absolutely worth picking up in Draft and could find a home in Standard, given the right circumstances. This cheap, two-mana Creature triggers whenever an Artifact enters the battlefield. Unlike some other cards with good triggered abilities nowadays, Yotian Dissident doesn’t trigger once per turn. Being able to throw around several +1/+1 counters during a turn is generally a great ability.

Brother’s War and future sets in this Phyrexian story arc will have heavy Artifact representation. There will be no shortage of playable Artifacts available for G/W lists to trigger Yotian Dissident’s ability. If this card can flex into a Bant shell, it could be a solid way to get additional value out of the created Powerstone tokens.

As Brother’s War spoilers continue, it’ll become clearer how much support Yotian Dissident has and how consistent its ability will be. As a signpost Uncommon, it will be one of the key cards in the GW color pair, but it’s yet to be seen whether it’s a solid roleplayer or a force in the format.