MTG Atraxa embodies tainted angelic power as Grand Unifier in Phyrexia: All Will Be One

Behold, the Phyrexian angel has arrived in Standard.

The angel of Magic: The Gathering Praetors has grown in power as Atraxa, Grand Unifier showcases the true strength of a Phyrexian angel in All Will Be One.

Prior to Compleating planeswalkers, Elesh Norn and her band of Praetors were creating a Compleated angel. Within the Phyrexia: All Will Be One (ONE) set is one of the most powerful MTG angels ever created: Atraxa, Grand Unifier. The seven-drop legendary angel has four keywords, 7/7 stats, and can dig through the top 10 cards of your library upon entering the battlefield.

Atraxa is the leader of all Phyrexian angels, answering directly to Elesh Norn. The color Red is not in her mana cost as Urabrask had nothing to do with her creation while the other four Praetors did. 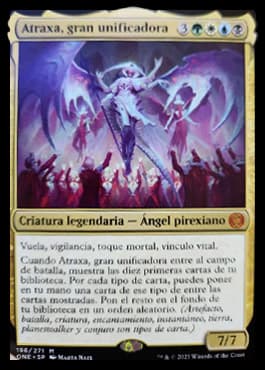 Upon entering the battlefield, Atraxa, Grand Unifier can fill a player’s hand with many key cards they might need during the late stages of a game. But those cards aren’t potentially necessary given the power levels of Atraxa.

The original Atraxa, Praetor’s Voice also had the keyword soup but lacked the stats that are now presented on Atraxa, Grand Unifier. Her ability has improved as well, although having Proliferate in addition to the angel’s new ability would have been nice to see.

Players can test out Atraxa, Grand Unifier with the digital release of ONE on Feb. 7 or at prerelease events that start on Feb. 3.