The Myr do more than watch now.

The beloved Magic: The Gathering Artifact automatons that were originally created by Memnarch are returning to the Standard format through Phyrexia: All Will Be One.

Myr were once the eyes of Memnarch as he ruled over the former plane of Mirrodin. These beloved MTG Artifacts were once small-statted Artifact Construct creatures that could add a specific color to your mana pool. The Phyrexian Myr are similar to their predecessors but have taken on the Phyrexian way by having the Toxic mechanic within the Phyrexia: All Will Be One (ONE) set. 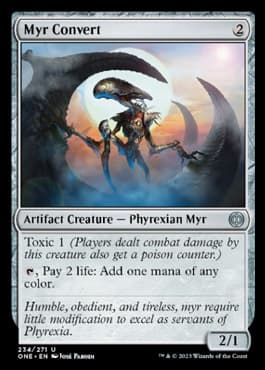 The MTG design team was also able to add additional Phyrexian flavor to Myr Covert through its activated ability, forcing the controller of it to pay two life (similar to paying for Phyrexian mana) to add one mana of any color to the mana pool.

The Myr won’t break the MTG Standard meta but they are a huge flavor win for the ONE set. And the Artifacts can provide additional mana options within the Limited formats and in formats like Commander.

Players can test out the Myr Convert at ONE prerelease events that start on Feb. 3 or through the digital launch on Feb. 7.