Go on an Adventure to find creatures then cheat their way onto the battlefield.

An Artifact called Monster Manual is capturing the essence of Dungeons & Dragons within the upcoming Commander Legends: Battle for Baldur’s Gate set. It also has the Magic: The Gathering Adventure mechanic.

Monster Manual encourages players to take an Adventure via Zoological Study by milling cards to find a creature. And then, when the Artifact is on the battlefield, players can cheat that creature onto the battlefield as well without paying its mana cost. 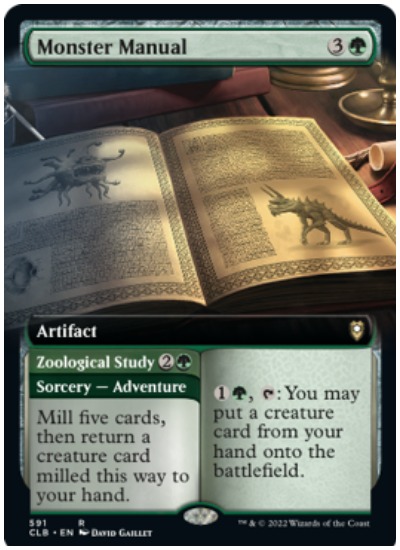 Artifacts are typically harder to remove, increasing the value of Monster Manual. It functions similar to Elvish Piper but has the Zoological Study Adventure to enable it better. Players can still whiff on the Sorcery spell. Milling a strong creature can swing advantage, though, especially during the early stages of a game.

Players can test out Monster Manual in Draft via Battle for Baldur’s Gate prerelease events that are running from June 3 to 5 and via the set’s global launch on June 10.