Mono-Black powerhouse Phyrexian Obliterator nabs reprint in MTG Phyrexia: All Will Be One

Phyrexians are invading and theyre bringing some of their strongest creatures with them.

The next year of Magic: The Gathering will see the culmination of a multi-set narrative with the first set of three, Phyrexia: All Will Be One, coming on Feb. 10. Wizards of the Coast decided to give fans a preview of whats to come in two months on Weekly MTG today. Basic lands and several new cards, including Elesh Norn, were revealed.

One notable reprint is the return of Phyrexian Obliterator, the chunky Black threat that acts as an excellent deterrent against decks that want to win through combat. 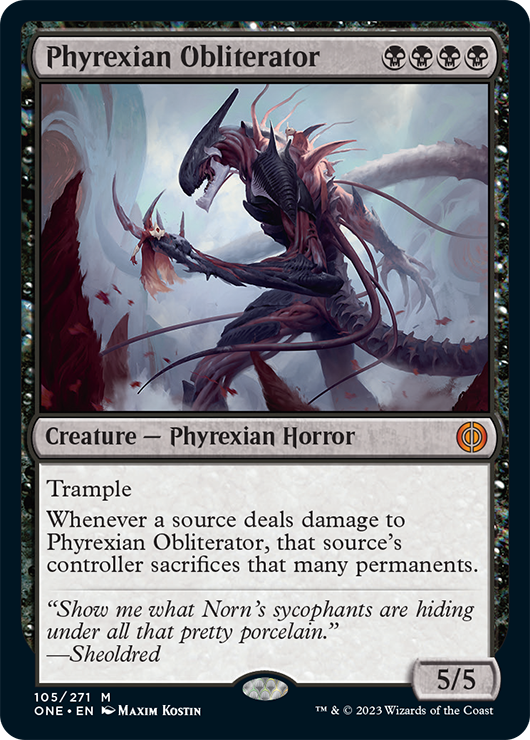 Mono-Black decks in Standard will welcome the addition of Phyrexian Obliterator to the format. It will have to compete with Sheoldred, The Apocalypse in the four-mana slot, but it does have some value at one or two copies. Its a rock-solid body as a four-mana 5/5 that dominates combat.

Opponents will not want to attack into it because blocks will force them to sacrifice permanents. They can try to block, but that will involve them having to give away five of their permanents to do so. Red decks struggle against this card because all of their removal is damage-based.

It isnt historically an incredible card, but overall, Phyrexian Obliterator will find a home in Standard. Depending on the metagame, it could end up being one of the better cards in Black decks.