The beta feels like a strong starting point for MW2.

Call of Duty is back, baby. Kind of.

The Modern Warfare 2 multiplayer beta has been running for a few days and a sect of the player base has hopped online to test out the next year or two of the franchise. And thankfully, the response has been mostly positive.

MW2 feels good so far. Not great, but good. With some changes, it could become one of the great Call of Duty titles. That’s what betas are for. Players can give feedback on what they like, what they don’t like, and what changes they think could help maximize the game’s potential.

Here are some suggestions on some positive changes for Infinity Ward and Activision to make between the beta’s end and the game’s full launch on Oct. 28.

By far the most-requested change on the official MW2 beta feedback Reddit thread, a change that was made for the past few CoD titles has returned. For unknown reasons, lobbies are disbanded after every single game.

The CoD player base is loud in their disapproval of this change, longing for the ability to stay in games and play with and against the same players. In the past, rivalries and even friendships were created in CoD lobbies when playing with the same players for several games at a time.

What sucks even more, though, is that this change is likely not to occur at all. Disbanding lobbies after each game seems like it’s hard-baked into the matchmaking system and won’t go away any time soon.

The final and other most-requested feature is the return of the classic mini-map that shows enemies as red dots when they fire unsuppressed weapons.

Do you want a classic minimap / red dots on the minimap in #ModernWarfare2?

This change was made in 2019’s Modern Warfare, much to the chagrin of the community, and nothing was done back then so nothing is likely to be done now. It’s a design decision by Infinity Ward, with reasons given in the past being that the team doesn’t want players to feel like they’re being “hunted.” They also want UAVs to feel like “more of a reward.”

The community is quite vocal about wanting this change to be made. It remains to be seen if Infinity Ward will listen.

It felt even worse with Dead Silence not unlockable during the first weekend of the beta, but footstep audio seems incredibly loud in MW2.

This creates a very slow, annoying playstyle where players crank their headsets and slow walk around the map while aiming down sights to try and fire at any enemy who is stomping their way. It’s not a fun way to play MW2 multiplayer, which seems perfectly rife for run-and-gun tactics otherwise.

This is a minor tweak that could make all the difference in the world. The time-to-kill, generally agreed upon by most players giving feedback online, feels too fast.

Gunfights feel way less fun when they just boil down to who sees the other player first, or who was hard-aiming down a sightline. The ability to read, react, and outplay an enemy who misses one or two shots is the most beautiful thing about online shooters.

Positioning is important, but turning on an enemy and outshooting them and screaming “GET SHIT ON” is more important in CoD.

The menu screens in Modern Warfare 2 are… a lot to take in.

The in-game UI is a huge departure from past Call of Duty titles. When you first hop on the game, you are greeted with a welcome message. Underneath that, you can select “what’s hot” and jump right into whatever playlists are most popular. 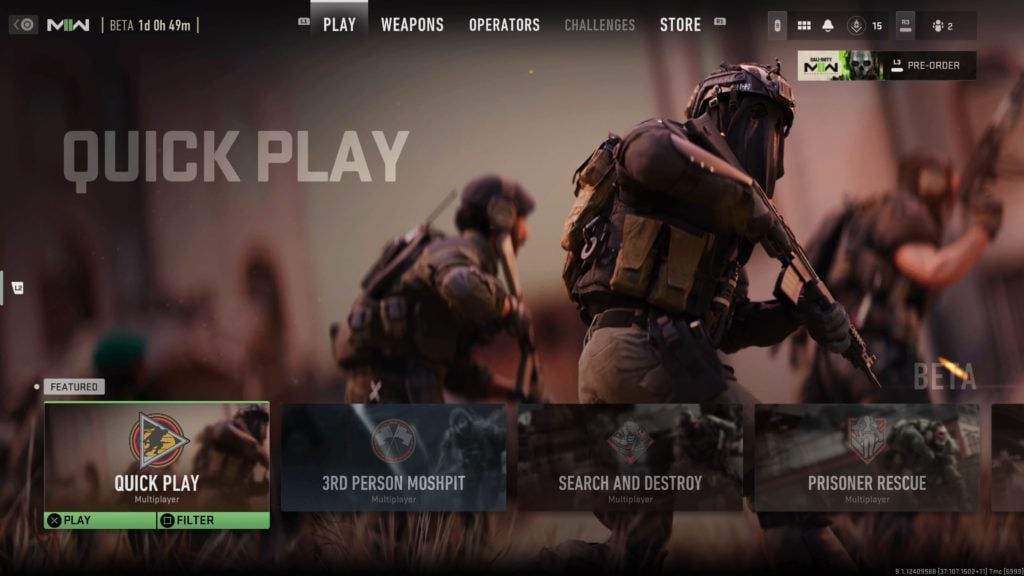 To get into the actual multiplayer menu, you need to scroll down again and select MW2 from the “Games” section. Right next to it is Warzone 2.0, which is unavailable and won’t be accessible until Nov. 16.

When you finally reach the multiplayer main menu, you’re greeted with even more options and more tabs, this time as horizontal selections as opposed to a vertical set of playlists. Quick Play requires separate button presses to play it or filter what you’re playing.

The tabs at the top swap between multiple options, and the weapons page features all of your loadouts, killstreaks, and vehicle customization options, but each of those pages has several different tabs and button presses to weed through as well.

It’s just a lot. Some simplification would go a long way, but it’s likely too late for much to change here.

Recoil is a thing, I get it, but wow, it’s too much in MW2. Visibility while firing your gun is a serious issue in the beta, making it nigh-impossible to see what you’re shooting at sometimes.

The issue can be mitigated by equipping some anti-recoil attachments on guns, but it’s still a problem no matter what you’re using. It’s highly disorienting and is a borderline issue when it comes to accessibility.