The upgraded system for reporting will allow CoD’s moderation teams to “restrict player features in response to confirmed player reports” as part of its security and enforcement policy, including banning players from using voice chat at all.

We are continuing our commitment to delivering a fun gameplay experience for players in #MWII, #Warzone2, and future Call of Duty titles.

Find out more about the in-game reporting system, new features to combat toxicity, and more here

“If a player is verified to be engaging in offensive voice chat, for example, our system upgrade now allows the moderation team to mute that player globally from all in-game voice chat features,” Activision said. “Similarly, our system can restrict text chat features for players found to be abusing in-game global chat.”

These in-game reporting features will also launch with Warzone 2 on Nov. 16 “and is foundational for all future Call of Duty titles going forward,” according to Activision.

Players logging on to MW2 for the first time were met with a Code of Conduct acknowledgment. Agreeing to that meant being aware of possible bans for toxic behavior, Activision says. 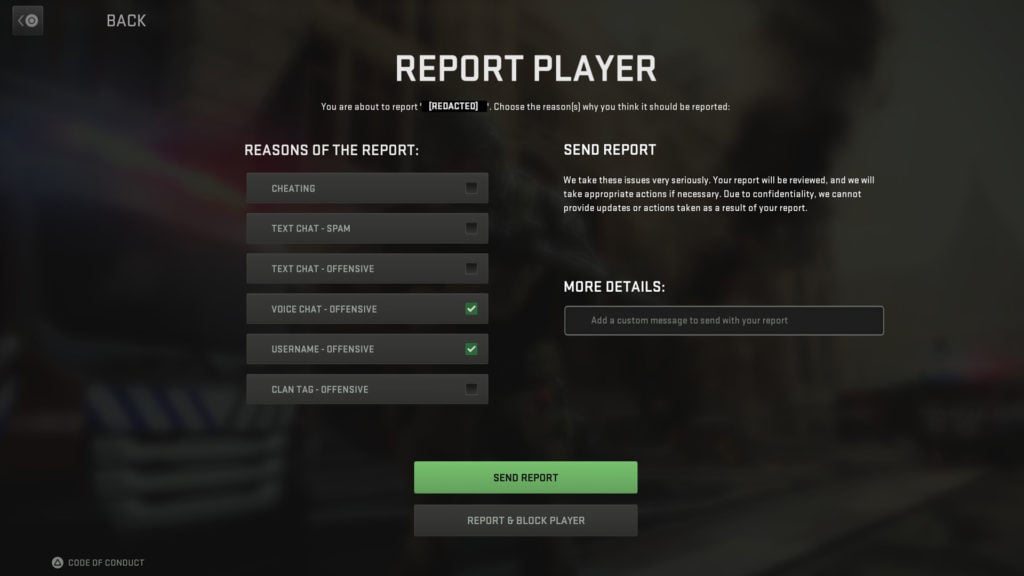 “The in-game Code of Conduct acknowledgment screen first debuted during the second weekend of the Modern Warfare II Open Beta, highlighting our mission to combat toxicity during the largest beta in Call of Duty history. Combating toxicity is an ongoing commitment,” Activision said. “We look forward to making progress on this front together as we continue in the fight to make Call of Duty fair and fun for all.”

Activision is adding some red to the all-black L.A. Thieves Modern Warfare 2 skin