Divided, the brothers failed to see how strong they could have been together.

Urza and Mishra are the focus of The Brothers’ War set, with each having a Magic: The Gathering non-creature spell that defines strategies in the colors of Blue and Red.

Slated to drop into local game stores through prerelease events on Nov. 11, The Brothers’ War (BRO) takes players back in time to the battle that once ravaged the Dominaria plane. Showcasing giant Mechs built by the brothers, both Mishra and Urza have multiple creature cards within the Standard-legal set. Revealed during Magic 30, they also have a non-creature spell within a BRO Command cycle.

Each Command cycle card is a modal spell, offering players two out of four options upon casting the Instant or Sorcery speed spell. All five colors within the BRO set will feature one Command style card. 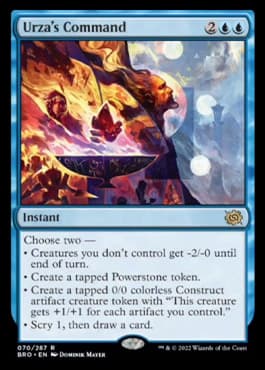 The Mono-Blue Urza’s Command costs 2UU to cast and is an Instant speed spell with a rarity of Rare. It offers a total of four choices, allowing its controller to choose two upon casting.

Urza’s Command leans into Artifact synergies while showcasing the power of Urza’s Mechs. The Artifacts were big and beefy, wearing away at opponents. The Command card also plays off strategies typically found in the color Blue, like Scry and draw a card. But it might be the creation of a Powerstone token that makes Urza’s Command a powerful card in Magic formats. 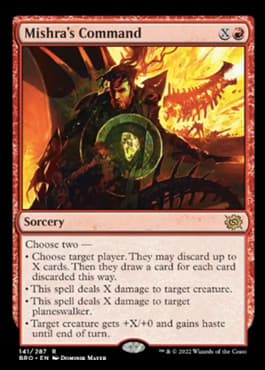 The Mono-Red Mishra’s Command costs (X)R to cast and is a Sorcery speed spell with a rarity of Rare. It offers a total of four choices, allowing its controller to choose two upon casting.

Mishra’s Command is the opposite of Urza’s. Unlike his brother, Mishra designed Mechs that were quick and sleek, using any type of material he could get his hands on. The Command card reflects this by giving creatures Haste or dealing direct damage to a creature or planeswalker. Mishra’s Command also leans into spells matter Blue/Red builds, providing card draw through the discarding of cards in hand.

Players can test out the Command cycle with the global launch of BRO on Nov. 18 or the digital launch on Nov. 15.