Mirage, Inferno, and Dust 2 among most popular CS:GO maps in matchmaking this year

One is considerably more popular than the others.

Mirage, Inferno, and Dust 2 are three of the most popular maps in CS:GO historyand that hasn’t changed in 2022.

The iconic maps are still three of the most played maps in matchmaking this year, according to stats and insights site leetify. The data provided comes from 5.2 million matchmaking matches analyzed from January to June 2022.

Mirage is the most popular map on the list, having been played in 29.6 percent of matches, which is a little over 1.53 million games in total. Inferno and Dust 2, the second and third most-played maps, respectively, are considerably behind the No. 1 spot, with 20.7 and 20.5 percent pick rates.

The fourth and fifth places are taken by Nuke and Overpass, recording an 8.1 and 6.8 percent pick rate, respectively. Down the line, there’s Cachewhich is no longer in the official tournament map poolwith a 5.7 percent pick rate. And then there’s Vertigo, Ancient, and Train at the bottom of the list. 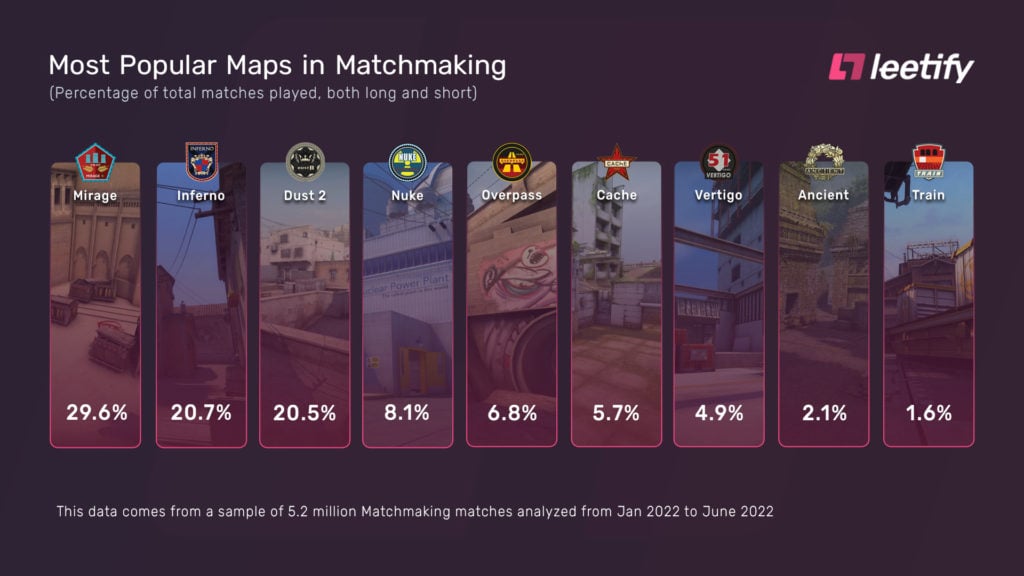 Dust 2 and Inferno are maps that have been officially reworked over the course of the last few years. The former was revamped in October 2017, while the latter was looked into by the devs a year earlier, in October 2016. Following their updates, they were quickly added to the official map pool once again.

Mirage is a map that hasn’t received an official rework yet, despite some of its flaws. But with players and pros frequently asking Valve to step in and make changes to the beloved map, we could be seeing some adjustments soon.

Latest comments
No comments yet
Why not be the first to comment?
Featured news
Counter-Strike16 minutes ago

Degster: ‘The biggest goal is to beat top teams and to win top tournaments [on OG]’