Throw Boo at the opponent over and over again.

Wizards of the Coast is returning to the world of Dungeons & Dragons with Commander Legends: Battle for Baldurs Gate, the second draftable Commander set that will introduce dozens of new legendary creatures to Magic: The Gathering.

Commander Legends in 2020 was the first draftable Commander set that also introduced cards directly to the multiplayer format. The upcoming edition to the series brings back mechanics introduced in Adventures in the Forgotten Realms and combines them with characters and settings from the Baldurs Gate series. Battle for Baldurs Gate releases on June 10.

Minsc and Boo appeared in Adventures in the Forgotten Realms as a three-color legendary creature. Minsc enters the battlefield and creates a Boo token that can grow to a massive size with Minscs activated ability.

Similar to the Adventures in the Forgotten Realms version, Minsc & Boo, Timeless Heroes from Battle for Baldurs Gate creates a Boo creature token that can quickly become the largest threat on the battlefield. Its another flavorful rendition of the beloved Baldurs Gate duo. 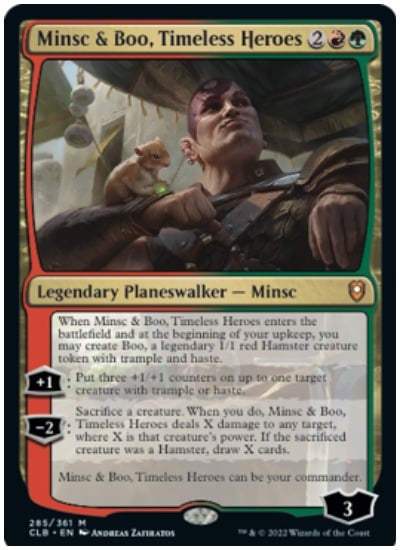 Minsc & Boo is a great planeswalker for an aggressive R/G deck. It works well in the 99 as a self-contained powerful card. The card also could perform well as the commander of a R/G deck that runs exclusively creatures with trample or haste.

Whichever direction you take with Minsc & Boo, itll be a worthwhile card that makes an impact on the battlefield immediately. This planeswalker enters the battlefield with a 1/1 token with trample and haste that can instantly get three +1/+1 counters. Any other cards with those keywords can get the counters instead, which gives Minsc & Boo solid flexibility.

The -2 ability has game-ending potential and will have a substantial impact on Battle for Baldurs Gate Limited games. It can deal direct damage to opponents or any key creatures. You can sacrifice the Boo token and get another one the next turn. R/G decks have access to high-powered creatures that will hit for four or five damage regularly when sacrificed.