All according to plan.

Though it was a close-fought affair, the chess world number scored another victory in the Meltwater Champions Chess Tour to extend his lead in the competition. The last round of this round robin tournament came down to a head-to-head clash between the players in first and second place, and Carlsen secured a vital win against young Indian phenom Rameshbabu Praggnanandhaa to take down the tournament.

While all this was going down on the top side of the Meltwater bracket, it was the player on the bottom who continued to make rounds on social media.

Nineteen-year-old Hans Niemann is no slouch, boasting a rating of 2687 in classical play, rated #40 in the world, but his wildcard invite to this event turned out to be nothing short of disastrous, with zero points (but lots of viral interviews) to show for his efforts in Miami.

It was a topsy-turvy event where the world number one often chose chaos over control on the chessboard, but it was still enough to break away from the pack and set up a final-day showdown with Pragg to decide the title. Heading into the last day of play, Carlsen had a two-point lead and a strong chance to win, with a drawn rapid portion guaranteeing the title even if he were to lose the blitz playoffs against his young rival.

Instead, Carlsen secured the match in the third game, racing to a 2-1 lead in the four-game series, which was enough to clinch the tournament victory.

The series still went to the blitz tiebreaks and Magnus uncharacteristically blundered away a mate in four that would have pushed it even deeper into the weeds with the Armageddon decider. 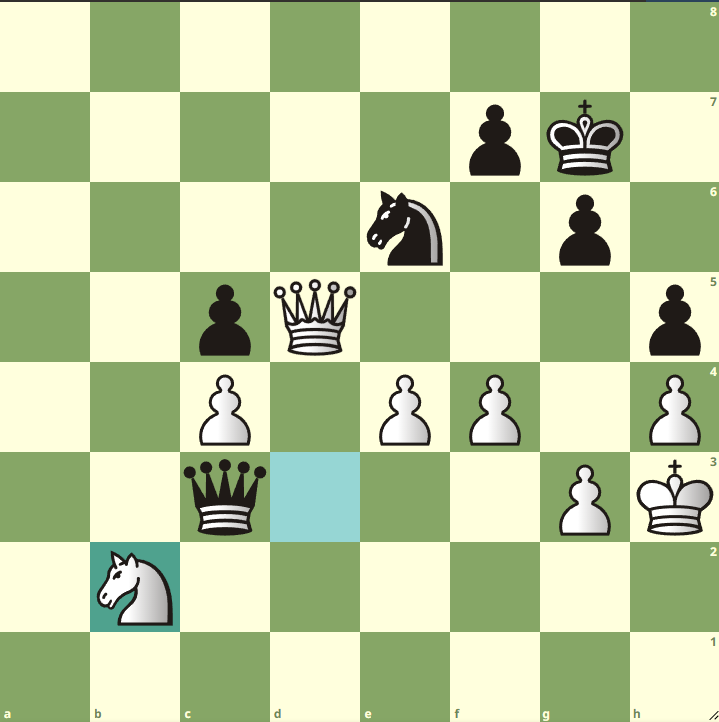 With just eight seconds on the clock, Carlsen missed the easy forcing win of Nxf4+, which either picks up the White queen, or better yet, delivers checkmate by force. Kh2 is Whites only legal continuation, after which there is no way to stop Black from forcing the king to the back rank and delivering mate on g2.

Blunders often come in pairs, and this was exactly the case here too: with the seconds ticking away, Carlsen gave away his knight, setting up a trick in an otherwise drawn position, but he missed how his subsequent queen move gave up the e5 square for the White queena continuation that leads to a straightforward win.

Thanks for now Miami. Been real

With tournament this win, Magnus has racked up a 46.5 point lead in the tour over his rivals, with Jan-Krzysztof Duda and Rameshbabu Praggnanandhaa in second and third place respectively. Two regular online events and the offline final remain from the 2022 season of the Meltwater Champions Chess Tour, with the next event scheduled for September 18-25.

It may have been Carlsen who won the tournament but it was Hans Niemann who turned out to be the breakout star of the FTX Crypto Cup. The young Americans played some scintillating chess and a multitude of head-scratching blunders, and it would be tough to argue against his last-placed finish on a performance basis.

But it was his conduct at the interviews, a combination of raw honesty and dark-laced humor, that had everyone pay close attention to his affairs.

In round one, he had a promising position against Jan-Krysztof Duda and a large lead on the clock, only for his opponents laptop to run out of battery power with no power cable in sight. (To keep this event in sync with the rest of the online tour and to promote an esports ethos, the players still played digitally over the board at this LAN event). He went ballistic in the post-game interview as the Polish players extra chance to think through the position allowed him to find a way to save the game and go on to win the match.

After winning game one against Magnus Carlsen in round two in spectacular fashion, he only gave a one-liner interview, saying the chess speaks for itself before walking away from the dumbfounded interviewer.

Niemann proceeded to lose the series 31.

Other gems included his reference to a four-digit UberEats tab, calling wins the only way to get over a defeat and further references to chess speaking for itself.

Latest comments
No comments yet
Why not be the first to comment?
Featured news
Chess7 days ago

Four draws and a Carlsen win kick off the Sinquefield Cup