A mega Magic: The Gathering cycle that began 20 years ago will get its second-to-last Sword in the upcoming Phyrexia: All Will Be One set.

Originally known as the Mirran Sword cycle, the MTG colors Red and Green will now have a Sword with the release of Phyrexia: All Will Be One. Each of the five allied and enemy colors will have a Sword upon the completion of the cycle. The two remaining colors are Blue and Black. The Sword of Forge and Frontier is the Red and Green Sword, revealed today by CFB, providing protection for its respective colors while also providing card advantage upon dealing combat damage to an opponent.

The Sword of Forge and Frontier

Every Sword in the Mirran cycle has two colors associated with it, gaining protection from those two colors while on the battlefield. Each Sword then has an ability, which for The Sword of Forge and Frontier is activated upon dealing combat damage to an opponent. 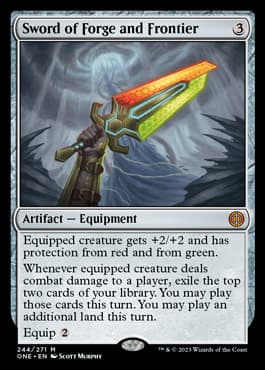 Sword of Forge and Frontier | Image via WotC

Like all the Equipment Swords in the cycle, the cost to cast is three mana of any color and the equip cost is two. For Equipment, the price is high outside of MTG formats like Commander. Cards that reduce the cost of equipping can increase the appeal of running a Sword in a format like Standard, but players are still running a chance of the Equipment becoming a dead card in hand due to its costs.

The Sword of Forge and Frontier attempts to alleviate some of its cost by allowing players to play an additional land upon dealing combat damage. Within the Commander format, this is a powerful effect that players can capitalize on.

In addition to dropping an additional land onto the battlefield, players can also cast one or both of the two cards exiled off the top of their library, providing a solid amount of card advantage. And the protection from Red and Green is icing on the cake, especially in a format like Commander where a majority of decks have two to three colors that are represented.

Players can test out The Sword of Forge and Frontier on Feb. 10 with the global release of ONE. A digital release will take place on Feb. 7 and prerelease starts on Feb. 3.