Summer is all but over while the action in Legends of Runeterra is heating up.

Riot Games officially dropped a Legends of Runeterra roadmap for the remainder of 2022 while teasing rotation and new ways to play in 2023.

Despite a rotation of devs and worry over the future of Legends of Runeterra throughout 2022, Riot isn’t abandoning the digital card game, posting a late but welcome back half of the 2022 roadmap on Twitter today. The remaining months of the 2022 schedule contain more Darkin drops, a World Championship, and several major balance patches. Several 2023 teases were also made, from more LoR-exclusive champions to new ways to play and a rotation. 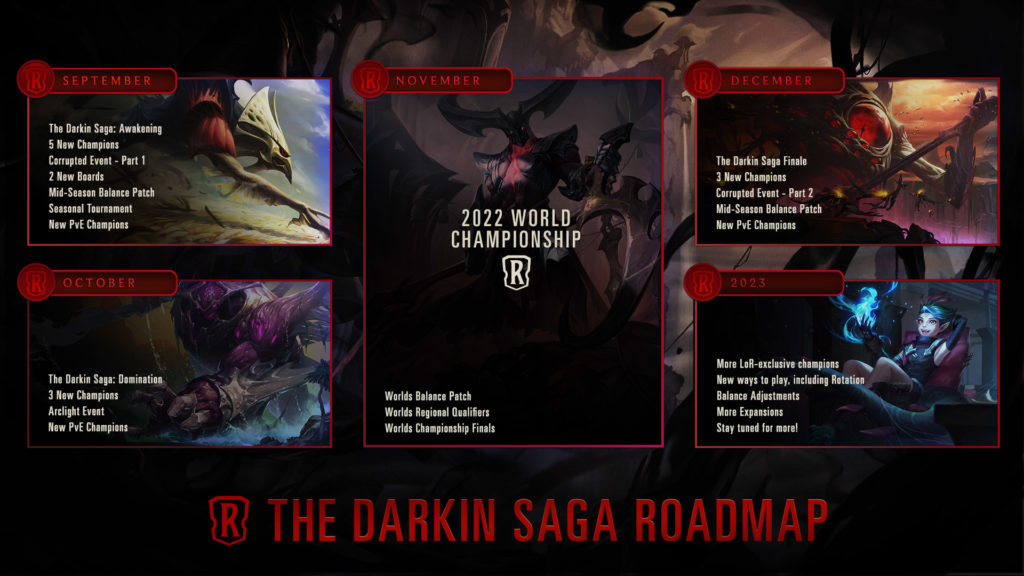 Rotation is a hot topic within the LoR community, with many players worried that it could have a negative impact on competitive and PvP ranked play. Card games like Magic: The Gathering rely on rotation to keep a Standard format fresh while creating multiple other formats that use older cards in both competitive and casual play. No details about the upcoming rotation were revealed at time of writing, although players should expect more information before the year ends.

Each month within the LoR 2022 part two roadmap showcases either new champions, competitive play, Path of Champions updates that include new champions, and balance patches. A seasonal tournament was listed under September but is likely scheduled for October.

Here’s everything taking place in LoR for the remainder of 2022.

Events and drops taking place in 2023, according to the 2022 roadmap, include additional LoR-exclusive champions, like Norra. Also expected to take place are new ways to play, a LoR rotation, more expansion releases, and balance patches to coincide with new expansion drops.

Players can dive into the Awaking expansion now in LoR, showcasing five new champions added to PvP and Path of Champions. It’s not too late to jump into the Corrupted event either, offering players rewards that range from wildcards to a Prismatic Kayn skin.