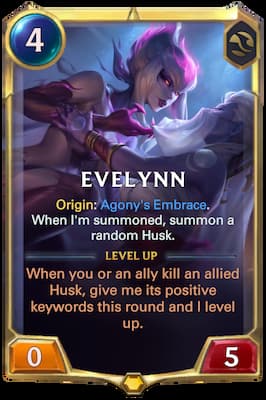 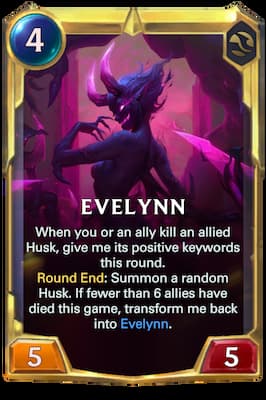 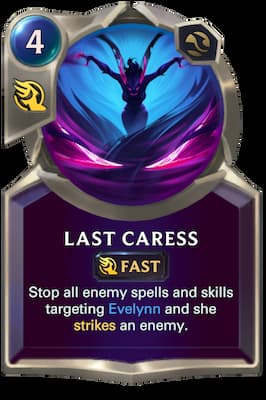 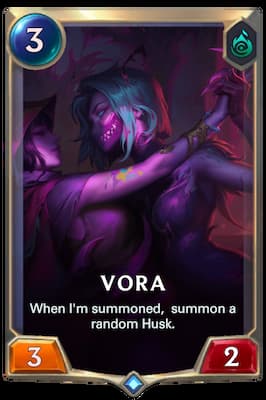 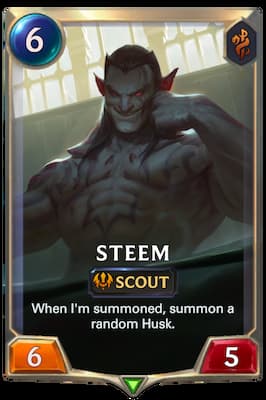 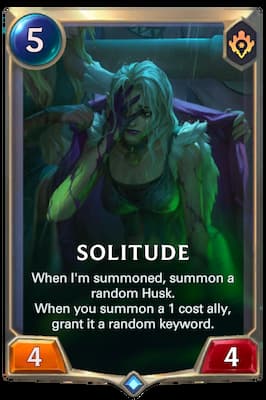 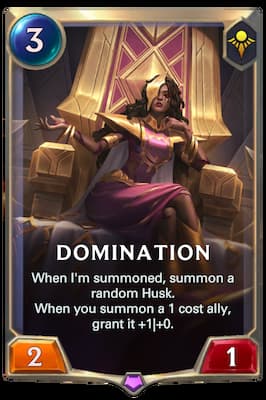 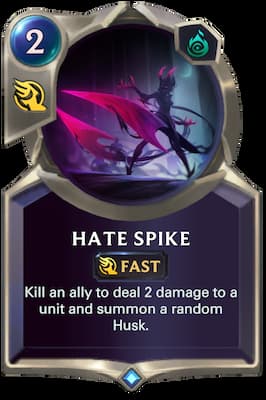 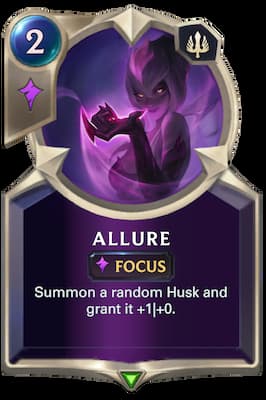 Riot Games dropped the final Legends of Runeterra champion spoiler within the Forces from Beyond expansion today, showcasing Evelynn with an Origin region.

Releasing tomorrow, the LoR Forces from Beyond expansion contains a total of three new champions: Gwen, Evelynn, and Kai’Sa. Gwen and her package of support cards slot into the Shadow Isles region and Kai’Sa is in the Shurima region. Revealed today by Riot, Evelynn will have an Origin region called Agony’s Embrace.

Patch 3.8 introduced the Origin region to Legends of Runeterra via Jhin and Bard. Evelynn is now the third champion within the digital card game to have an Origin. An Origin counts as its own region. And Evelynn’s Origin, Agony’s Embrace, allows players to put any cards that summon Husk tokens into a deck during deckbuilding.

Evelynn starts out at level one as a four-cost with 0/5 stats. When summoned, she summons a random Husk token. She levels up when you or an ally kill an allied Husk. The keyword on the Husk is given to Evelynn for that round and her stats increase to 5/5.

At the end of a round, Evelynn will return to her level one form unless six or more allies have died during this game. And at the Round End stage, Evelynn summons a random Husk.

Evelynn’s LoR champion spell is Last Caress, a five-cost Fast speed spell that stops all enemy spells and skills from targeting Evelynn. She then strikes an enemy.

A total of seven cards were revealed today that synergize with Evelynn. Five are followers and two are spells. Unlike Evelynn, her support package LoR cards have a region assigned to them. Any followers or spells that summon a Husk may get included in an Evelynn deck due to her Agony’s Embrace Origin.

The five follower units showcased today in the LoR spoilers drop of Evelynn are Vora, Steem, Solitude, Sultur, and Domination.

All Husk tokens are one-cost units, triggering the additional abilities found on Solitude and Domination. Evelynn naturally synergizes with Kai’Sa, creating numerous keywords for the other LoR champion but will likely work in various other archetype shells as well.

Players can watch how Evelynn works during the Forces from Beyond early access event that starts at 1pm CT today and test out all the new Legends of Runeterra cards within the expansion when it’s released on July 20.

Latest comments
No comments yet
Why not be the first to comment?
Featured news
Legends of Runeterra2 hours ago

Spicy Legends of Runeterra nerfs and buffs in Patch 3.13 will affect Seasonal meta