Legends of Runeterra confirms Jax as the next champion in Awakening

Riot Games dropped a major teaser for Legends of Runeterra today, showcasing token weapons that are Equipment and dual-region followers that will provide support for Jax.

Scheduled to release on Aug. 31, the Awakening expansion will contain a new card type through Equipment. Dual-region cards outside of Bandle City are also getting added, revealed today during the LoR spoilers. Ten cards in total were previewed today, eight of which were created Equipment in the Runterra region and two that were multi-region followers whose flavor text confirms that Jax is the next LoR champion.

Jax was confirmed through both of the dual-region followers’ flavor text with a new card type called Weaponmaster: Fireth, Reaper of the Sands and Ionian Hookmaster.

Related: How Mysterious Portals and Norra work in Legends of Runeterra

The flavor text for Fireth, Reaper of the Sands says “Jax asked for Fireths name two dozen times in their first weeks of travel together, but she would only ever growl, ‘I am the Reaper!’ Breshi found a novel solutionhed just baked a cake, you see, and needed the name of the groups strongest member to properly celebrate.” 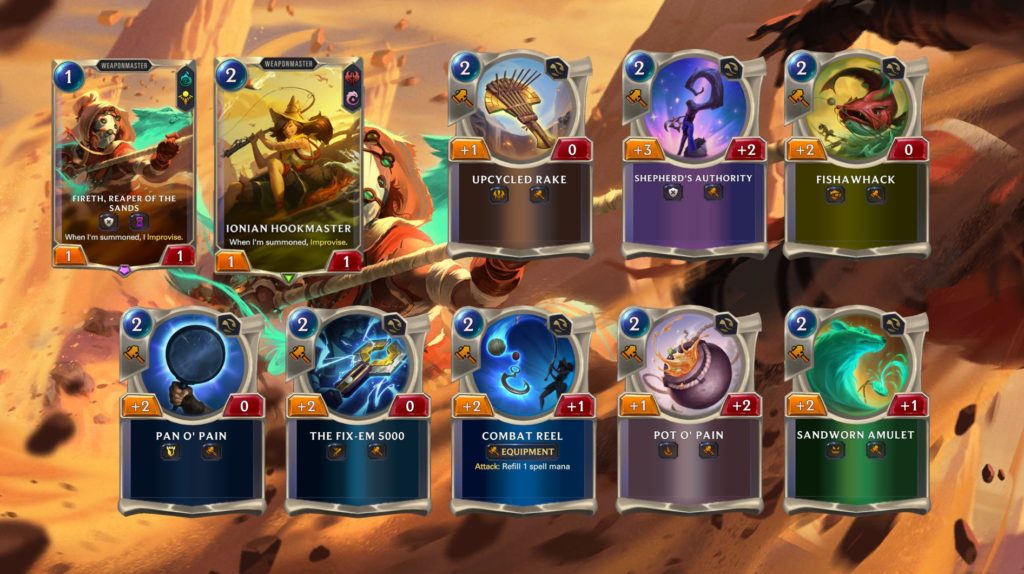 Image via Riot Games and Kozmic

And the flavor text for Ionian Hookmaster reads “Trisks life was turned upside down when, during what would be her last fishing tournament, she somehow managed to fish up a sputtering Jax. He refuses to discuss the incident, but the sea monster Trisk rescued him from gets bigger each time she retells it.”

Both champions also feature a new mechanic called Improvise, which Riot has yet to release a description for at time of writing. In conjunction with the Weaponmaster followers, eight non-main deckable created weapons were shown that are Equipment within the Runeterra region.

The Equipment weapon tokens are likely associated with Jax as they range from a wrench to a fishing rod. And Improvise may end up creating these Equipment tokens. Jax will join three other champions revealed so far during the Awakening spoilers: Kayn, Master Yi, and Norra.

Players can test out all the new LoR cards with the release of Awakening on Aug. 31.

Latest comments
No comments yet
Why not be the first to comment?
Featured news
Legends of Runeterra20 days ago