Get ready for a whole new meta.

Riot Games dropped a visual layout of every Legends of Runeterra balance change taking place in Patch 3.13, showcasing nerfs and buffs that are guaranteed to shake up the Forces From Beyond meta.

Scheduled to take place on Aug. 17, Patch 3.13 is packed with nerfs and buffs that have specifically targeted top-tier decks and archetypes sitting on the fringe of the meta. Several devs were moved by Riot from LoR to other projects, having players worried about minimal balance changes and even a decrease in balance updates. 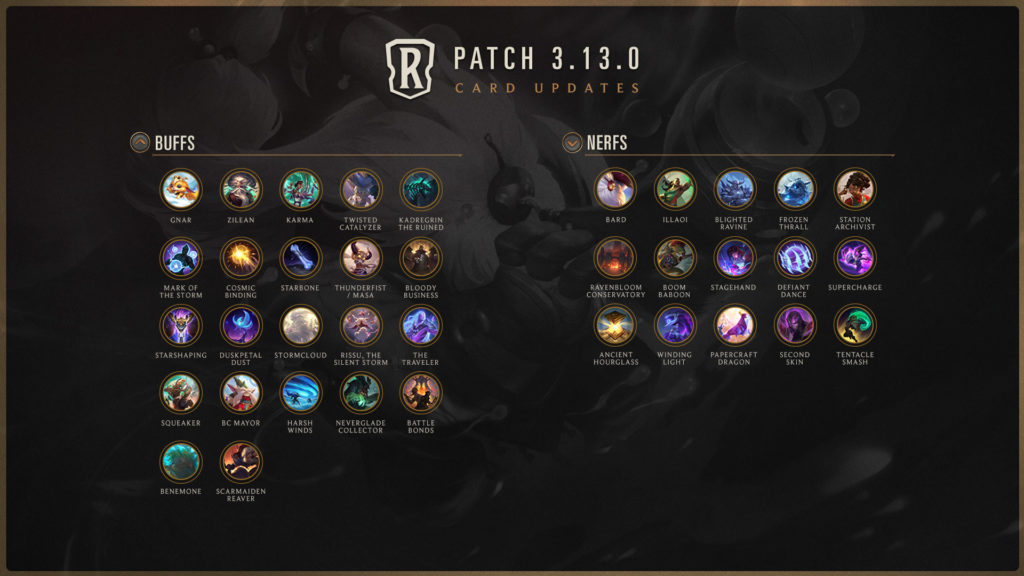 In addition to the major nerfs, buffs are taking place as well. Once ruling the meta how Kaisa is now, Gnar is getting a buff that could prompt a revival of several LoR archetypes. Zilian and Karma are also slated for buffs. And the Darkness archetype has potentially returned to its former glory following a bug fix to Ixtali Sentinels Darkness effect in Patch 3.12 and now a buff to Twisted Catalyzer in Patch 3.13.

Multiple spells are slated for nerfs in LoR Patch 3.13. Changes players should keep an eye on are Tentacle Smash, Supercharge, Second Skin, and Defiant Dance. And buffs to watch for are Mark of the Storm, Starbone, and Duskpetal.

The notes for Patch 3.13 are scheduled for Aug. 16. All balance changes shown by Riot today are subject to change prior to the release on Aug. 17.

Latest comments
No comments yet
Why not be the first to comment?
Featured news
Legends of Runeterra24 days ago