Some players are truly dedicated to their main.

“What’s your main?” is a question many League of Legends players have answered at one point in time. Although the game includes over 150 playable characters, some players just can’t get enough of playing just one of them.

Sometimes, mastering the champion and letting the world know how much of an expert you are at playing your main even becomes a goal.

That’s how omeeT, a player from the Vietnamese server, recently made a name for themselves as the ultimate Teemo main. They broke the record of most Mastery points earned in the world recently, with over 19 million, according to League of Graphs.

Related: These attention-starved League champions could use a bit of love from Riot 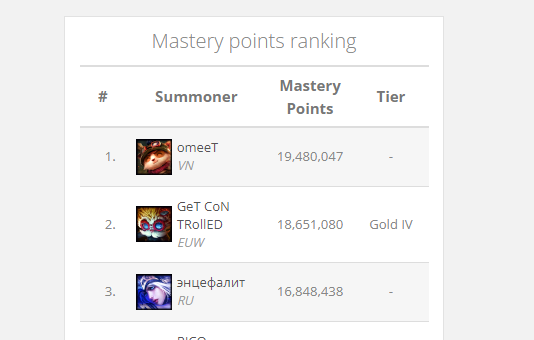 Screengrab via League of Graphs

The fan who first mentioned omeeT’s achievement also said they were famous in the Vietnamese community. According to them, Teemo was the main champion of his girlfriend, who passed away several years ago. He’s been playing Teemo almost exclusively since then.

With an account level of 2,103, omeeT has played a considerable amount of games since the limit of level 30 was lifted in 2017.

And in most of their games, Teemo is their champion of choice, whether it’s in the top lane, support, or mid lane.

Teemo is certainly one of the most famous champions in League. He’s easily recognizable thanks to his unique design, whether it’s his cute yordle face or his green adventurer’s hat.

In the game, however, he’s certainly one of champions players hate to play against. For this reason, he’s become the preferred target for memes and jokes in the community.

His poison mushrooms can decimate players even when he’s dead, and he can pop out from his passive invisible state to surprise his opponents. His sneaky playstyle leaves no prisoners.

Teemo is also very popular. He appears frequently in the lower ranks. Several players across the world have earned over 10 million Mastery points on him, according to the League of Graphs. Other champions who appear often in the rankings also include Ashe, Janna, Ahri, and Heimerdinger.