A group of passionate T1 fans based in South Korea are planning on sending a message of disapproval to the League of Legends team ahead of today’s series in the 2022 LCK Summer Split.

As a sign of protest, the fans are dispatching a truck to LoL Parkthe LCK venue in Seoul, South Koreawith a sign that reads, “Incompetent head coach. Coach who’ve demoted agreed his package of ability. The answer is: hire coaches who won Worlds,” according to a translation on Reddit.

T1’s current head coach, Choi “Polt” Seong-hung, joined the team in November 2020 before being promoted to head coach and the general manager position just a year later. With Polt, the team reached the semifinals of Worlds 2021, won the 2022 LCK Spring Split, and placed second at this year’s Mid-Season Invitational. Despite his positive track record, he is still a reasonably inexperienced coach when compared to iconic names like former T1 head coach Kim “kkOma” Jeong-gyun, who moved on from the team in 2019 and now coaches regional rivals DWG KIA. 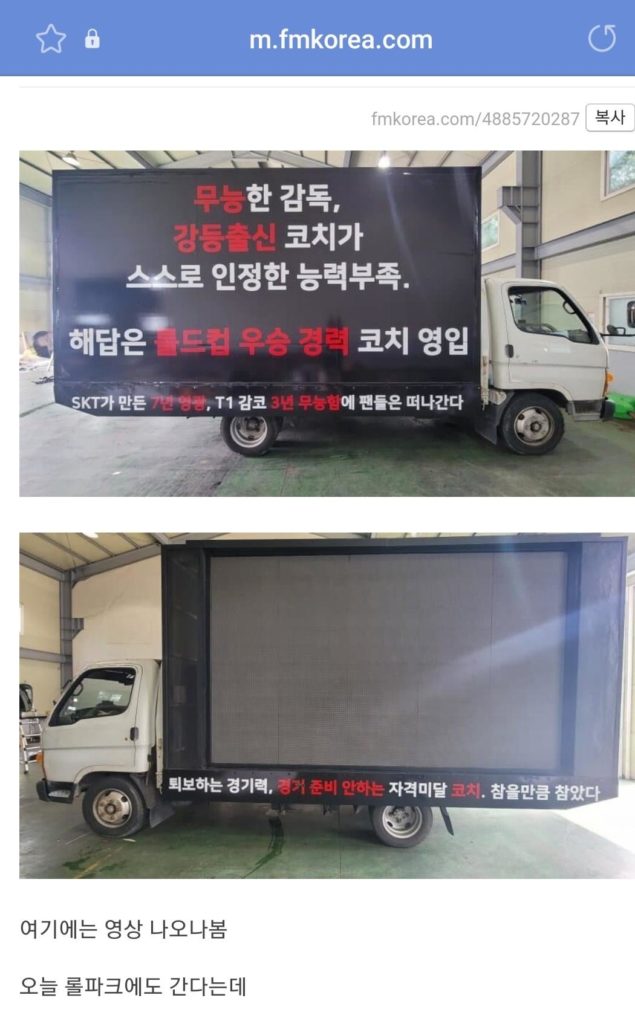 Kim “moment” Ji-hwan, T1’s assistant coach, is also relatively inexperienced in the role, having joined from Jin Air Green Wings in 2019 after the former LCK team was relegated from the league before franchising was introduced in 2021.

This message of disapproval from T1 fans follows a formal letter that was written on July 27. According to a translation, fans requested the team part ways with moment, pointing to the coach’s poor record.

T1, who have a comfortable 12-2 record in the LCK and have already secured a spot in the 2022 LCK Summer Split playoffs, are set to face off against Hanwha Life today at 6am.

Worlds 2022 is scheduled to take place in North America from Sept. 29 to Nov. 5. A total of 24 are expected to attend the event, including four teams from South Korea.