The weak fear the shadows.

Legends of Runeterras Awakening will introduce Kayn to the game as one of five new champions coming in the expansion.

Equipment will be available in every region and work similar to attachments, giving stats and keywords to the cards theyre attached to.

Equipment cards are not standalone units. They can be played with spell mana but will pass priority. Equipment cards can be unequipped but wont be able to be played next round. If an ally thats equipped dies, the equipment will go back to your hand. Units can’t double up on equipment.

Some units will have the ability auto-equip. This means a specific item is automatically equipped to the unit from hand, play, or is created if needed. 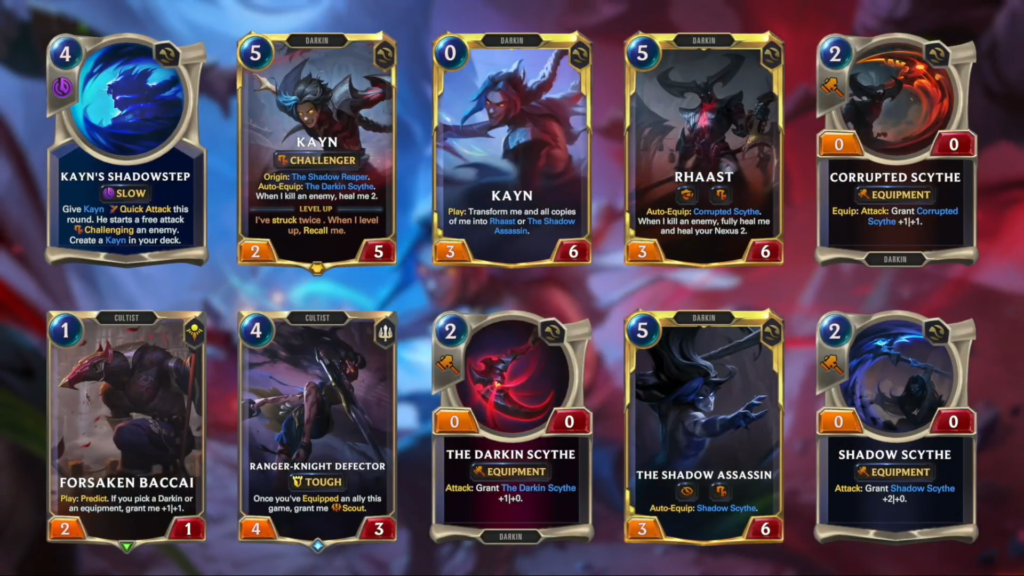 Kayn is a five-cost 2/5 champion with challenger. He comes with the origin The Shadow Reaper. This origin lets the player put any Cultist cards into the deck during deckbuilding. When you have summoned three or more different Cultist units, you draw a Kayn.

Level one Kayn equips The Darkin Scythe, which grants +1/+0 on attack.

Reflecting the decision League of Legends players face, when Kayn levels up, he is recalled and becomes a zero-cost. When he’s played, the player has the option to pick between two variations. If Kayn dies as Rhaast or The Shadow Assassin, he’ll need to be cast again for the full cost.

Rhaast is a five-cost 3/6 with overwhelm and challenger. He auto-equips the Corrupted Scythe. When he kills an enemy, fully heal it and your Nexus by two. Corrupted Scythe is a piece of equipment that gets +1/+1 on attack.

The Shadow Assassin has the same stats as a five-cost 3/6 but has elusive and challenger. It auto-equips Shadow Scythe. Shadow Scythe is an equipment that gets +2/+0 on attack.

This choice lets players pick the best option for their given situation and can greatly inform deckbuilding.

Rhaast is more of a bruiser that can dominate combat and force favorable trades. It could be worth it to pair Demacia or Freljord cards with Rhaast.

The Shadow Assassin acts as a strong finisher with a hard-hitting equipment and the elusive keyword. An all-in elusive deck with some Targon protection could be an excellent shell to support The Shadow Assassin.

Latest comments
No comments yet
Why not be the first to comment?
Featured news
Legends of Runeterra20 days ago