Unleash the power of the sylex.

Utility Artifact cards can be found in almost every deck in Magic: The Gathering and the upcoming set Dominaria United may have introduced another staple.

Decks need targeted answers against the metagame. What makes utility Artifacts great is that they are usually colorless. This means they can go into any deck regardless of its color. Karn’s Sylex is a new Artifact that has the potential to be a fixture in sideboards and Commander decks for years to come.

Karn’s Sylex is a callback to the Golgothian Sylex, a powerful Artifact Urza used during the Brother’s War. The winter Magic set is The Brothers’ War, set during the world-changing conflict. 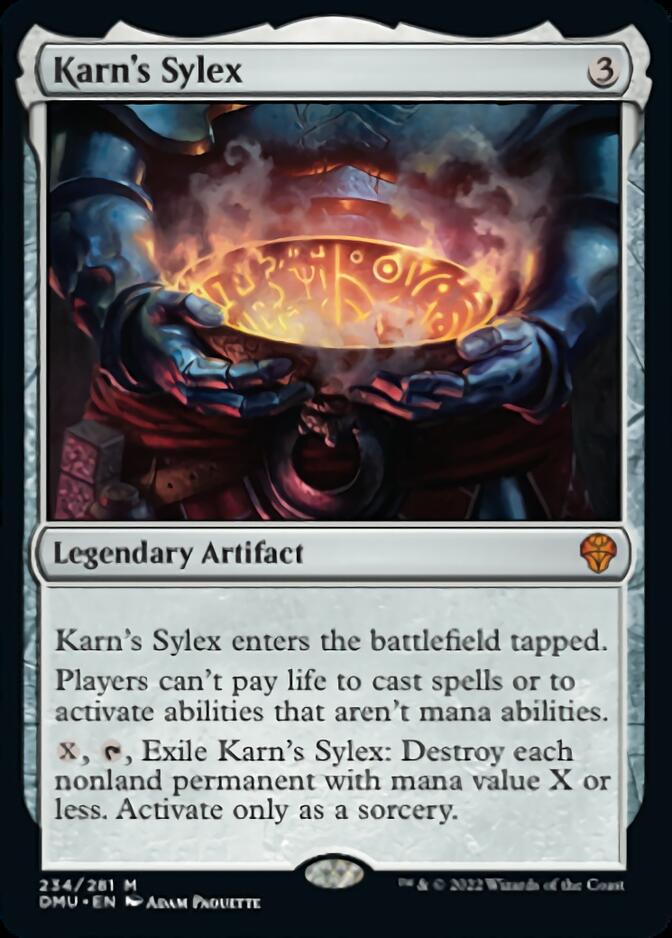 Karn’s Sylex provides a lot of silent value. It doesn’t overwhelm the battlefield or help you ramp, but in the right format, Karn’s Sylex can be a silver bullet out of the sideboard. Shutting down paying life to cast spells or activate abilities is great in eternal formats.

Being able to prevent Yawgmoth, Thran Physician or Bolas’ Citadel from working will severely slow down decks built around those cards. It stops the opponent from cracking their fetch lands. At three-mana it might be too slow in a format like Modern, but in the right archetype like Tron or Affinity, it could work.

In Standard, Karn’s Sylex doesn’t stop much. It does prevent the opponent from using Tenacious Underdog’s Blitz ability. As more cards enter the format, the ability should look better.

The card’s activated ability is great. It can destroy each nonland permanent less than or equal to X. This is an effective way to reset the battlefield and will be especially strong against aggro decks with low mana value creatures. It is not as good as Meathook Massacre, but in decks that can’t afford the BB cost, Karn’s Sylex will do fine.

Dominaria United releases digitally on Sept. 1 followed by a tabletop release on Sept. 9.