Jax joins Legends of Runeterra as Weaponmaster with new Origin

It's time to weaponize.

Riot Games dropped another champion into Legends of Runeterra today, showcasing Jax as the Grandmaster of Arms.

Scheduled to release on Aug. 31, Jax will join Kayn, Master Yi, and Norra as new champions within the LoR Awakening expansion. Jax is a Runeterra champion, meaning he has his own Origin region. The Origin, Grandmaster at Arms, allows players to include any cards from any region in LoR that have the Weaponmaster type. To celebrate the upcoming release of Jax, Riot dropped a trailer for the new LoR champion today.

Jax is all about Equipment, a new card type getting added with the Awakening expansion that his support package summons through the keyword Improvise. Based on information from Riot, Improvise gives players a choice of two random Equipment from a depleting pool of eight in total.

Level one Jax is a two-drop 3/2. Upon getting played, he Auto-Equips the Equipment called The Light of Icathia. The Equipment gives Jax Quick Attack at level one and adds Overwhelm upon him leveling up.

Level two Jax has 4/3 baseline stats, along with Quick Attack and Overwhelm from The Light of Icathia. Upon attacking, Jax gains +1/+1 for each Equipped ally that round, up to +6/+6. And the champion spell for Jax is Counter Strike, a three-drop Burst speed spell that gives Jax Barrier this round and Forge him. 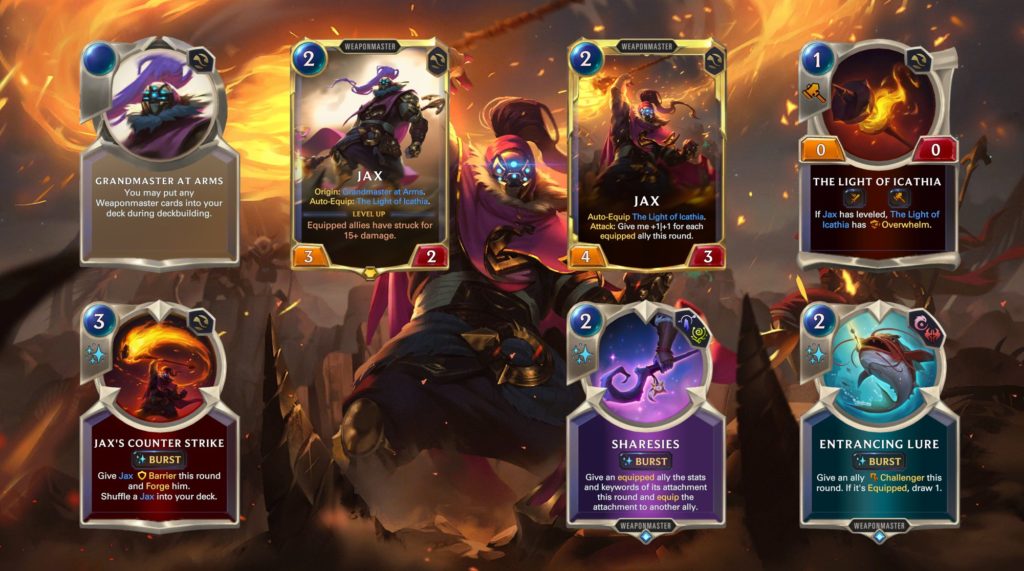 No details of what Forge is were released at time of writing. But it’s possible that Forge is related to Ornn, meaning Ornn is coming as an LoR champion and bringing his powerful Artifacts with him.

No additional Weaponmaster followers were revealed today, but two additional dual-region Weaponmaster spells were. Entrancing Lure in Ionia and Bilgewater is a two-drop Burst speed spell that gives an ally Challenger this round. If that ally is Equipped, it draws one, adding more card advantage to the Jax support package.

The other dual-region spell was Sharesies, a two-drop Burst in Targon and Bandle City. Sharesies gives the stats and keywords from Equipment on a unit for that round and then allows its controller to move that Equipment onto another unit, essentially creating a ghost Equipment on the original unit for one round while moving the Equipment onto a new ally unit.

Players can test out Jax and all the new LoR champions with the release of the Awakening expansion on Aug. 31.