Time to brush up on your times tables.

Magic: The Gatherings story is reaching a fever pitch with the new set, Phyrexia: All Will Be One, causing many of the games main characters to undergo a horrifying transformation.

The Phyrexians are a threat to the multiverse and are looking to revive Phyrexia in their metallic vision. Planeswalkers are being transformed through a process known as compleation, a process of removing the soul and replacing the body with nothing but artifice. For the Phyrexians, this is a process that brings beings closer to perfection.

Jace is one of the planeswalkers, alongside his beloved Vraska, to be changed by the Phyrexians through compleation. ONE is a major inflection point with several planeswalkers meeting a similar fate to Tamiyo and Ajani from previous sets in the story arc.

His mind must be overflowing with knowledge because his new cardJace, the Perfected Mindis a dedicated mill planeswalker that has a powerful X ability if left unchecked. Wizards of the Coast revealed the card today during the first day of spoiler season. 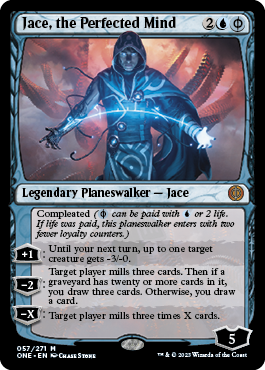 Mill gets another solid planeswalker to go along with the archetype that doesnt ever seem to go away. This four-mana planeswalker can enter the battlefield with three loyalty, but it will generally be better to just wait until turn four and cast it without the life payment. When Jace enters the battlefield, it can immediately be cashed in for its -X ability to mill 15 cards in one hit. This is a great option for a late-game situation to close out a match.

If the -X wont immediately lead to the end of the game, its best to use Jaces other abilities to control the game and earn bits of value. The +1 is a nice way to shut down an opposing threat. -3 power is enough to stop most early-game creatures from dealing damage. The -2 is a great way to further the mill game plan while gaining card advantage in the process. Look to use the -2 more than the other two loyalty abilities.

Jace not being able to protect himself well doesnt really matter for a mill deck. As long as this card is able to throw cards from the opponents deck to their library then it has served its purpose. Its unlikely that Jace will show up outside of dedicated mill decks. For the cost, there are plenty of better options for Blue decks in Standard.

Phyrexia: All Will Be One will be released on Friday, Feb. 10.