Squad up with Task Force 141, but only if you have the cash.

A new Call of Duty: Modern Warfare 2 info drop today contained some concerning information for players who may be looking to hop online as their favorite characters from the CoD universe.

The blog post detailing progression in MW2 has a section for unlocking operators, including the four that can be grabbed simply by finishing the campaign. There are 14 others that are unlocked through challenges in multiplayer, Warzone 2, or Special Ops. Another is a PlayStation exclusive for pre-orders.

There is more to explore after the 55 Military Ranks
at launch from fully unlocking the arsenal and Operator roster to ranking up Special Ops Kits, and even starting the ultimate journey toward Weapon Mastery

But then there are the four big ones: Captain Price, Soap MacTavish, Ghost, and Farah. The blog post says that these four characters, easily the most well-known and popular ones at launch, are “included in the Red Team 141 Operator Pack, part of the Modern Warfare 2 Vault Edition.” That’s all.

The $100 Vault Edition includes the Task Force 141 Operator Pack, FJX Cinder Weapon vault, the season one battle pass, and 50 tier skips. Yes, that Vault Edition. It’s an extra $30 compared to the base game.

Since they’re not unlockable, it certainly seems like players will need to fork over some extra cash if they want to play as the game’s flagship operators. It’s always possible that they could be accessible through challenges post-launch, but making the Red Team 141 pack purchasable in the in-game store is more likely. 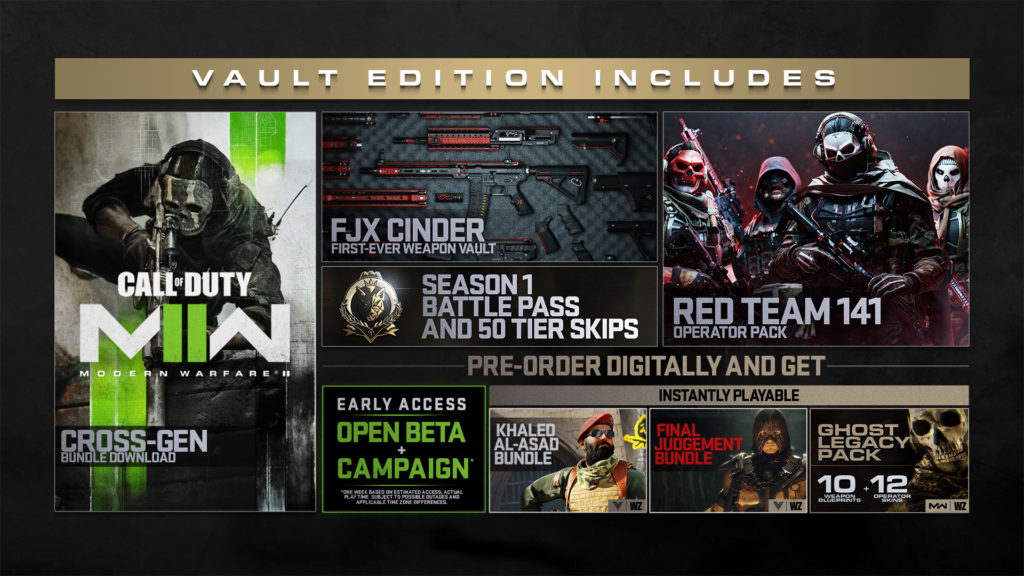 Modern Warfare 2 and all of its post-launch content will begin rolling out on Oct. 28.