The map formerly known as Portugal was a labor of love for the design department.

One major selling point of Overwatch 2 has been the promise of new maps and interesting locales for players to visit. In betas of the game, weve been sent to the chilly streets of Toronto and the beachfront bliss of Rio de Janeiro. When early access opens on Oct. 4, Overwatch 2 players will be whisked to the picturesqueand realisticavenues of Esperança, Portugal.

The Push map leads teams through stone and mosaic streets alongside bright yellow trolleys and traditional fountains. Tall buildings, painted in white and blue with traditional architecture, surround the paths.

If it looks like a picture straight from someones photos of home, thats because it is.

The Overwatch 2 teams lead environment artist is from Portugal and they took his lead (as well as that of other designers from the country) to create Esperança. 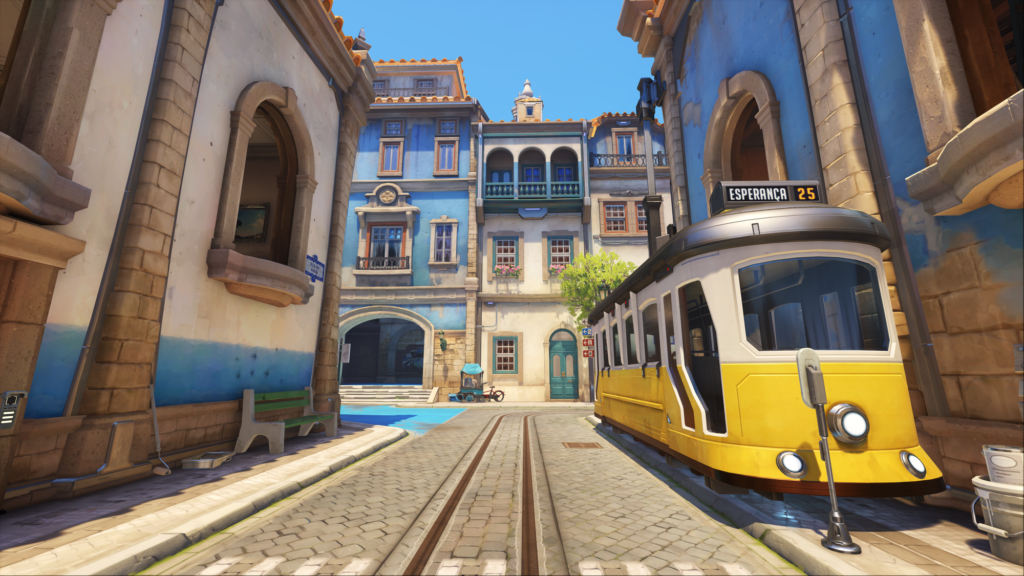 I think it captures a ton of the culture pretty accurately because the reference is so clear, said art director Dion Rogers. They really showed us what was great about the culture, what [were] the right things to build architecture-wise.

Using tons of vacation pictures from the designers, the art team went above and beyond to create an accurate representation of Portugal. An entire sound team was sent out to capture ambient noise and theres even a room with news playing in Portuguese.

Weve found some of our best maps come from when we have a person on the team thats actually from the location, Rogers said.

I really hope people from Portugal see the care that went into it.

As far as the maps functional design, Rogers and his team noted it has extensive places for flankers and snipers. Theres a gradual incline on the map that makes for interesting interactions. Many of Overwatch 2s maps, like Circuit Royal and Colosseo, have leaned hard into verticality and this might be no exception.

For players who are tired of seeing the same two Push maps every week in the Overwatch League, Esperançawhich means hopemay give them a brighter outlook for a future full of new, colorful places to visit.