How to watch the Spanish League of Legends Superliga

Here's how and when to watch one of the best League of Legends national leagues.

The Spanish League of Legends Superliga is considered the strongest national league in Europeand the new season is now underway.

With five new teams joining the league, the world will be paying close attention to the national league that’s been growing LEC-bound talent for years. The Superliga is a league that’s previously featured some popular LEC players, such as SK’s ex-top laner Werlyb or MAD Lions’ current jungler Elyoya.

From new teams backed by world-famous streamers and soccer players to world-class soccer teams and new European powerhouse academy teams, the Superliga is bound to bring some surprises in 2022.

When does the Superliga start?

The Spanish League Superliga’s 2022 season officially began today, Jan. 10, and will take place every Monday and Thursday until the end of the regular season. Movistar Riders and Team Heretics kicked off the season, followed by the first games of the year for G2 and Fnatic’s academy teams. For Fnatic TQ specifically, this marked their debut in the Superliga. 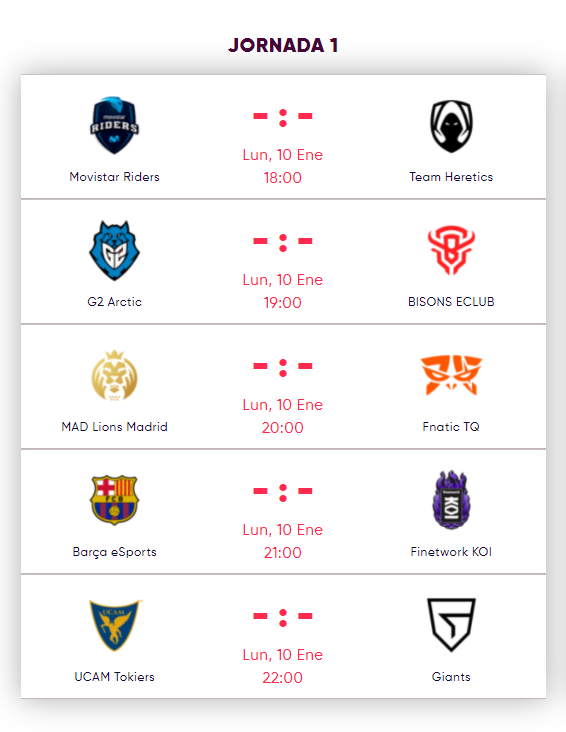 Day one schedule of the Superliga. Screengrab via LVP

Where to watch the Spanish League Superliga

Fans looking to see all the action for themselves can tune into the Superliga’s Twitch channel every Monday and Thursday from 10am CT to 3pm CT. Although there have been rumors of an English stream for the Superliga for years, only the Spanish one is available for now. But it’s well worth the watch to see some of Europe’s most promising talent and to experience the audibly loud passion of Spanish casters.

The post How to watch the Spanish League of Legends Superliga appeared first on Dot Esports.