You're currently out of luck with this attachment. 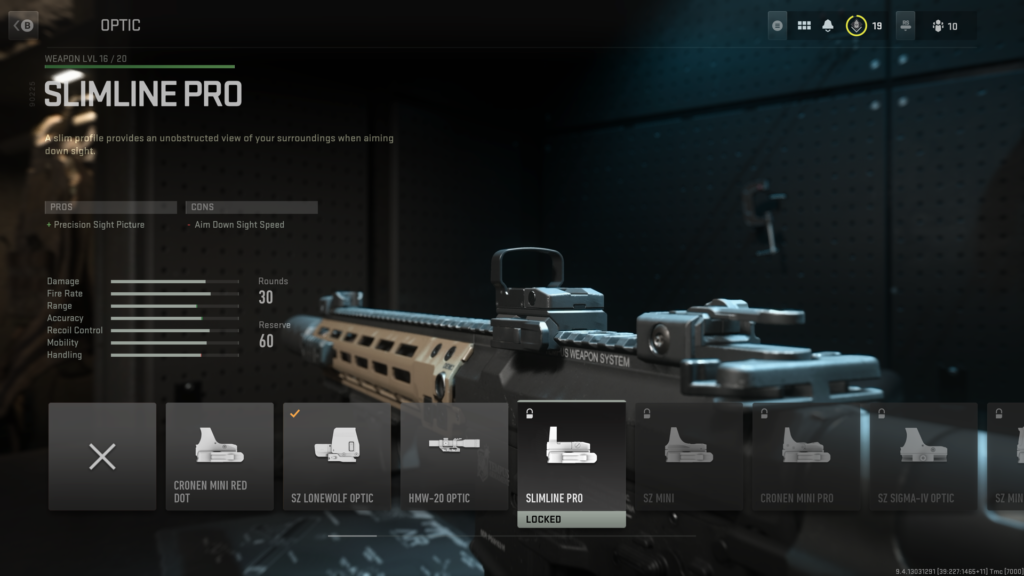 This can be confusing to the uninitiated, and even veteran players will likely need a few hours to understand how to unlock certain weapons or attachments. But some attachments, like the Slimline Pro Optic Red Dot Sight for the M4 weapon platform, currently dont have a clear explanation of how to unlock them. So, how exactly do you unlock the Slimeline Pro Optic Red Dot Sight in Modern Warfare 2?

Unfortunately, there is currently no way to unlock the Slimeline Pro Optic Red Dot Sight in standard multiplayer modes. Players can use the attachment in private matches, but you won’t be able to use it in public games at the time of writing. There is no description explaining how to unlock the attachment when you hover over it in the Gunsmith menu, leaving players everywhere scratching their heads.

The sight is also present in the campaign mode, adding more confusion on why it’s not available in the more popular multiplayer mode. Activision will likely address this in a future patch. Infinity Ward has already released updates to improve Modern Warfare 2, and hopefully, the Slimeline Pro Optic Red Dot Sight will receive a similar change.

More weapons are probably coming in future Modern Warfare seasons, and the Slimline Pro Optic Red Dot Sight might be tied to one of these weapon platforms. In the meantime, consider other optics for your M4 builds.

Unavailable attachments are just one issue in the new Gunsmith system in Modern Warfare 2. Players complain about the convoluted system, as you need to unlock certain platforms to unlock specific weapons. This is an interesting change of pace, but it also adds many options players must navigate before jumping into a game.

For example, the Vaznev-9k is a popular weapon being used by professional players, but it requires unlocking three different weapons before it can be used. Fortunately, this weapon is unlockable in the base game, unlike the unattainable Slimline optic. Other classic CoD content, like the Barracks and Hardcore playlists, are also currently absent in Modern Warfare 2. Hopefully, these features will be included alongside the missing optic in a future update.

Microsoft trash talks Call of Duty in response to investigation