How to best use and counter Leapfrogger in Hearthstone Battlegrounds

Here’s how to best use, and counter, this new Tavern Tier Two Beast that's a croaking menace.

Hearthstones latest patch, 21.2, brought a massive revamp to the games popular Battlegrounds mode, replacing 37 minions and bringing a wealth of other quality-of-life changes. One new early ribbiting unit has drawn the eyes (and ire from the opposition) of many players seeking to amplify the power of their Beast builds.

Heres everything you need to know about Leapfrogger.

How does Leapfrogger’s spreading ability work and why do the stats leap to ridiculous heights?

Compared to the Goldrinn/Macaw Beast comps of older Battlegrounds metas, Leapfrogger isnt a high tavern tier unit, meaning that you can realistically get a strong mid-game comp online as soon as you reach Tavern Tier Two or Three. While Leapfroggers spreading ability looks innocuous on its own, the ability to duplicate or double the Deathrattle, thanks to cards like Monstrous Macaw or Baron Rivendare, makes Leapfrogger deadly.

In addition, due to how gained Deathrattles work in combat, if a Beast with an ability that summons more Beasts on their demise gains Leapfroggers effect (like Rat Pack), then the freshly spawned token is given the chance to obtain the Leapfroggers Deathrattle.

How to best use Leapfrogger

While most Goldrinn/Macaw comps in the past used to avoid running Beasts that had Deathrattles (which included Amalgadons with Plants), the new Leapfrogger ignores this limitation. To get the most use out of your Leapfrogger, you should aim to pick up early units like Monstrous Macaw to trigger the obtained Deathrattle. After cruising through the mid game, picking up a Baron Rivendare (found as a Tier Five unit) will finalize your composition.

To taunt your Leapfroggers, cards like Houndmaster and Defender of Argus have useful Battlecries that can give you the taunt you need to succeed.

If youre given the opportunity to high roll and obtain all of these tools, the image as follows is an ideal way to set up your positioning for Leapfrogger-styled Beast comps.

As the example image shows, any non-taunted Leapfroggers should be in the front so that way you can get their Deathrattles triggered first. Any taunted Leapfroggers should be in the back since your opponent will be able to kill them easily. After your Leapfroggers without Taunt have declared their attacks, Monstrous Macaws afterward will be able to activate the massively spread Deathrattle and provide ridiculous stat gains thanks to the ability of Baron Rivendare.

If youre The Lich King or find any Reanimating Rattlers, then providing your Macaws with the Reborn keyword will allow them to swing again, which provides another round of stat gains and Deathrattles. 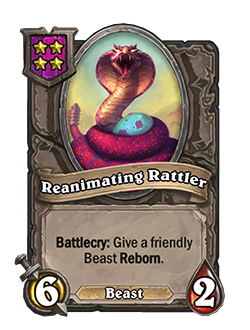 Once all of your Leapfroggers and Monstrous Macaws have met their demise, Beasts that spawn Deathrattles (like Savannah Highmane and Rat Pack) will be able to carry the game all on their own. Even if they die with their high health and power, they’ll spawn a wealth of tokens and then Leapfroggers ability will activate, which will have them reach astronomical heights if the battle has gone on long enough.

While knowing how Leapfrogger works is effective if youre given the chance to play it, running into this hopping menace can end your run if youre ill-equipped. While defeating Leapfrogger early on in-game with Macaws and Deathrattle Beasts can be a difficult task if your opponent already has taunts set up, you have an easier chance the later the game goes on. Leapfrogger comps rely on Baron Rivendare in the later stages of the game to reach ridiculous stat totals, but you can use minions like Zapp Slywick to ignore taunts and go straight for Baron Rivendare. While this would rely on a 50/50 of you being able to attack first, this strategy also gets countered if the Baron receives stats or protection (like Quilboars Blood Gems or Georges Boon of Light Hero Power).

If youre unable to reach the chance to find Tavern Tier Six cards, triple your minions with Windfury into Mega-Windfury to get multiple swings and rely on luck to reach the Baron. But this second strategy becomes less reliable if your opponent has multiple taunted Beasts or Sewer Rats to protect the Baron and Macaws.

If the opposing Leapfrogger wielder is positioning incorrectly or has one too many taunts, a potent minion with cleave like Cave Hydra, Foe Reaper 4000, or Wildfire Elemental (with pseudo-cleave) can potentially snipe a Baron Rivendare or Macaw. If this is your only option in the late game, then it’s fine to rely on your opponent to potentially misplay because that could be your only hope for victory.

You can now try your hand at wielding or defeating the Leapfrogger since Hearthstone Battlegrounds’ revamp is live.

The post How to best use and counter Leapfrogger in Hearthstone Battlegrounds appeared first on Dot Esports.

Latest comments
No comments yet
Why not be the first to comment?
Featured news
Hearthstone4 days ago

New round of balance changes is coming with Hearthstone patch 21.3