Get up to speed on new and returning Magic mechanics.

Fall rotation in Magic: The Gathering will kick off with a return to the plane of Innistrad, featuring new and returning mechanics.

Scheduled to release globally on Sept. 24 and digitally on Sept. 16, Innistrad: Midnight Hunt (MID) is a Standard-legal Magic set showcasing a horror of the night theme. There are a total of 277 regular cards within the set and six MTG mechanics that have been revealed so far. Some are returning mechanics, like Transform, which was reworked into Daybound and Nightboud. Others like Disturb are new to Magic.

From Coven to Flashback and Decayed, here’s every MTG mechanic contained within Innistrad: Midnight Hunt.

The MTG mechanic Flashback was first revealed in the MID preview stream via the Sorcery spell, Join the Dance. Flashback is tied to the original Innistrad block and was first introduced to Magic via the 2001 Odessey block. To use Flashback, a player must pay a designated mana cost to cast an Instant or Sorcery spell from their graveyard that has Flashback. Once the spell is cast, it’s then exiled. 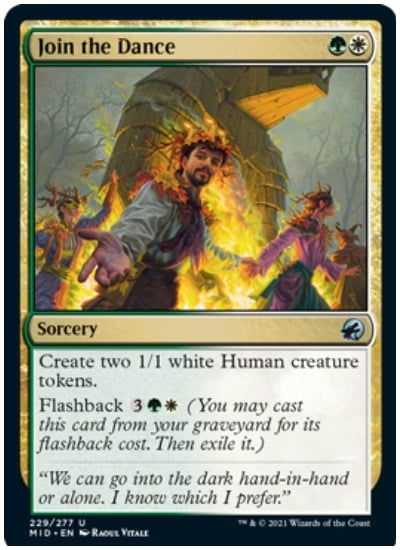 Flashback on Instant and Sorcery spells offers players a chance to replay them at their choosing for an increased mana cost. It’s an extremely powerful mechanic in Limited and will see gameplay in the Standard format, too.

The keyword Transform was an integral part of the original Innistrad, showcasing double-faced cards. WotC did a rework on Transform, creating the mechanic Daybound/Nightbound. The planeswalker Arlinn Kord is featured in MID and uses Daybound/Nightbound in a similar way to the Transform mechanic. 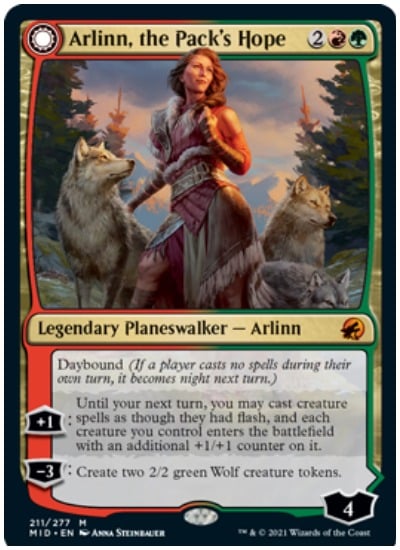 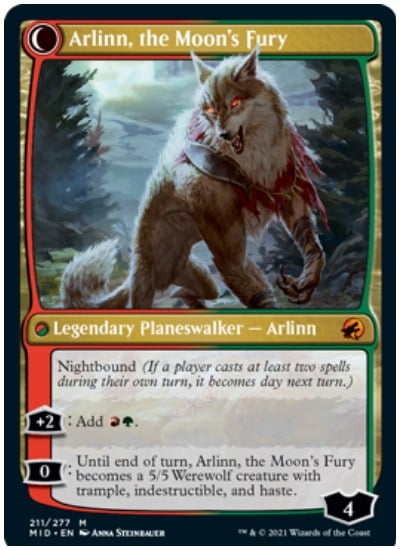 Another example of Daybound and Nightbound in MID can be found on the Legendary creature Tovolar, Dire Overlord. Daybound is triggered if “at the beginning of your upkeep, you control three or more wolves and or werewolves, it becomes night. Then transform any number of human werewolves you control.” Upon transforming, the Legendary creature becomes Tovolar, the Midnight Scourgeshowcasing a mana-sink ability that pumps a target wolf/werewolf +X/+0 and gains Trample until the end of turn. 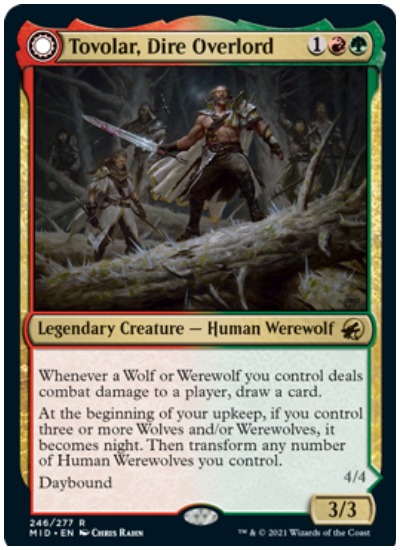 Daybound and Nightbound affect all players, not just the controller of the card triggering the MID mechanic. This will matter across all MTG formats but will most likely have a large impact on Commander. 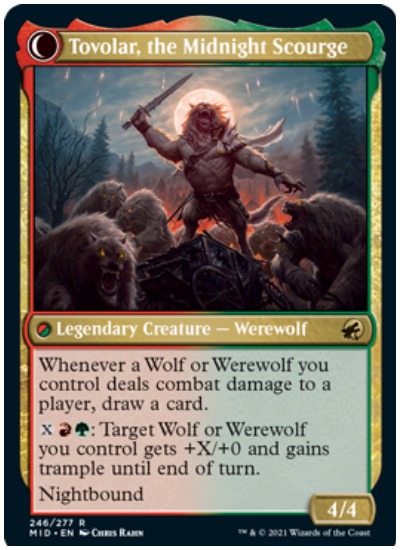 Disturb is an extension of Flashback, allowing players to cast creature cards (not just Instant and Sorcery spells) from their graveyard at a specified mana cost. In MTG formats like Limited, Disturb could have a major impact, bringing back a creature to the battlefield upon running out of gas or mana flooding. 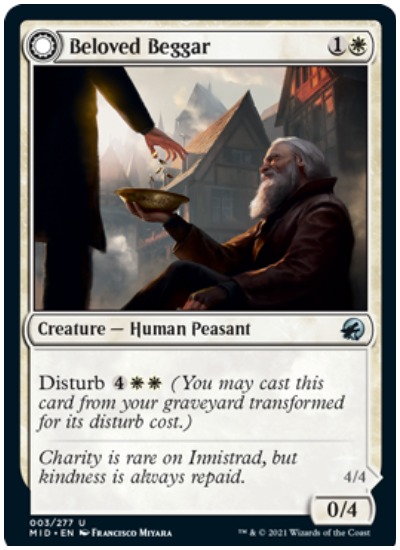 Beloved Beggar is an Uncommon with Disturb that was first revealed to have the MID mechanic. The human peasant has a casting cost of 1W with 0/4 stats. A player can choose to pay 4WW to return Beloved Beggar to the battlefield via the Disturb mechanic.

Decayed is an MTG mechanic tied to zombie creature tokens. It prevents the creature from blocking and the token is sacrificed at the end of combat when it attacks. The first Decayed card revealed in MID was Jadar, Ghoulcaller of Nephalia. 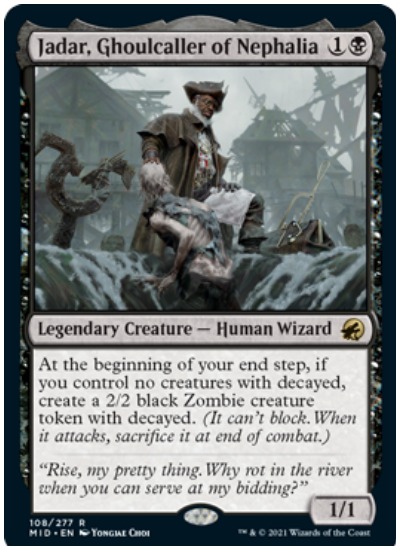 The human wizard is a two-drop that creates a Decayed 2/2 zombie creature token if its controller doesn’t have any creatures with Decayed on the battlefield at the beginning of their end step. Tokens with the Decayed mechanic are great for applying early pressure on an opponent or as a sacrifice outlet.

Coven is a new MTG mechanic introduced within MID and was first revealed on Sigarda, Champion of Light. When a player controls three or more creatures with different power stats, the Coven mechanic is turned on, providing a bonus. 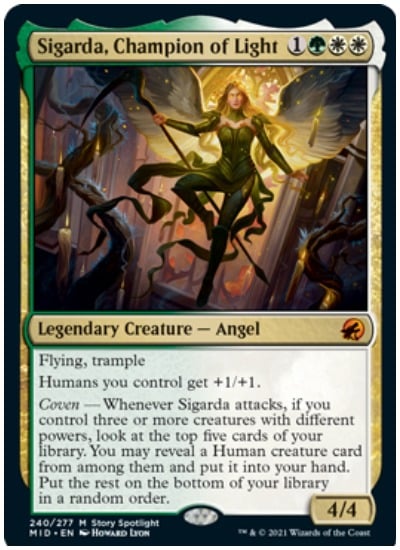 In the case of Sigarda, Champion of Light, the bonus is that her controller may look at the top five cards of their library in search of a human creature that can be put into their hand.

Ward is a returning MTG mechanic that shouldn’t be underestimated, especially within the Limited format. The mechanic protects a permanent from becoming the target of a spell or an ability by countering it. An opponent may pay a specified mana cost to prevent their spell from being countered, or life depending on the Ward cost. 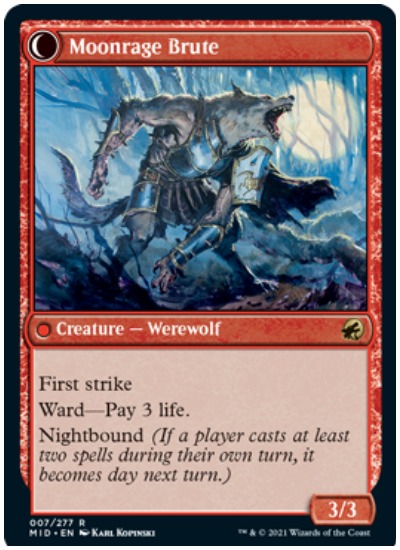 Should an opponent choose to pay the extra Ward cost, they can still target your creature with a spell but at an additional mana cost that could prevent them from making other plays that turn. And in late-stage games, losing life might not be an option for an opponent who only has a few life points left.