With the group stage wrapped up, only eight team remain in contention for this year's LCS Lock In title.

The group stage of the 2022 LCS Lock In tournament is wrapped up, and the eight teams to advance to the knockout stage have been placed into a single elimination bracket for the tournaments final stage. Over the next two weeks, the remaining teams in the Lock In tournament will compete to win the first event of the North American League of Legends season.

Here are the matchups for the 2022 LCS Lock In knockout stage, which is slated to begin tomorrow. 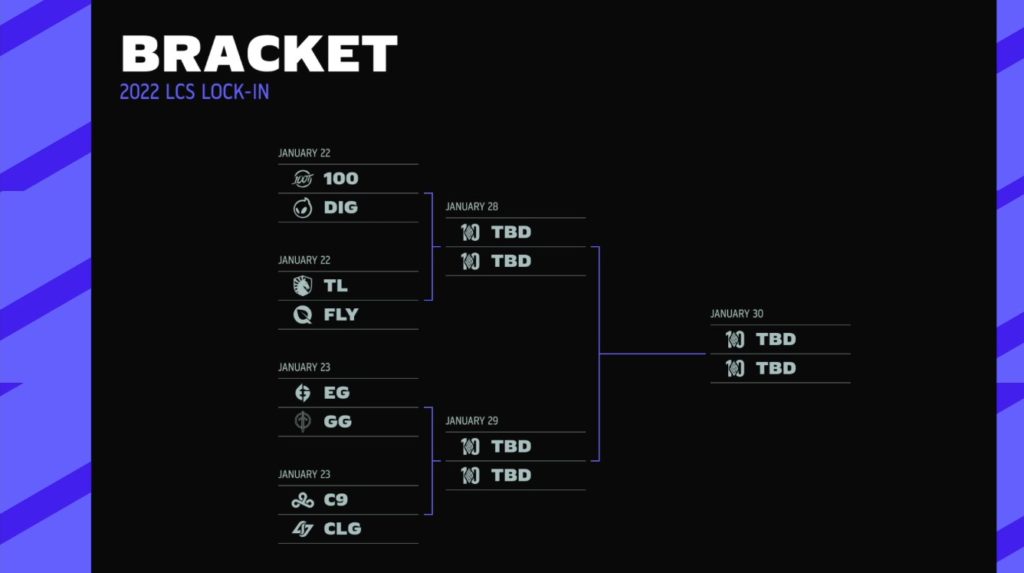 The teams from Group A and Group B will compete against each other for the first time in the LCS Lock In tournament after the league was split down the middle to open the event. Because they finished last in their respective groups, TSM and Immortals did not advance to the quarterfinal round of the Lock In.

In the quarterfinals, teams will play best-of-three series against each other to determine who moves on to the second weekend of the knockout stage. The semifinal and final rounds of the bracket will feature best-of-five series.

The finals of the LCS Lock In tournament will take place on Jan. 30. The 2022 LCS regular season will begin on Feb. 5.

The post Here are the matchups for the 2022 LCS Lock In knockout stage appeared first on Dot Esports.