Here are the matchups for the 2022 LCK Regional Qualifier

One last chance for the rest of Korea.

Although Gen.G and T1 have already qualified for the League of Legends World Championship out of the LCK, two Worlds berths from the region remain up for grabs. Gen.G and T1 have locked up the number one and number two seeds out of Korea, respectively, but the LCKs three and four seeds are still available.

Those two berths will be available to claim during the LCKs Regional Qualifier, a last-chance style event for teams who finished third through sixth on the Championship Points leaderboard this season. Teams accumulated Championship Points based on their placements in the Spring and Summer Playoffs, and have been placed into a bracket based on those placements accordingly.

In the Regional Qualifier, the third seed regarding 2022 Championship Points will play the fourth seed, while the fifth seed will play the sixth seed in the first round. The winner of the first regional match will be slotted directly into the World Championship group stage. The second round of the LCK Regional Qualifier is equally important as the first, as it determines which team will claim Korea’s last berth at Worlds and advance to the tournament’s play-in stage.

Here are the matchups for the 2022 LCK Regional Qualifier. 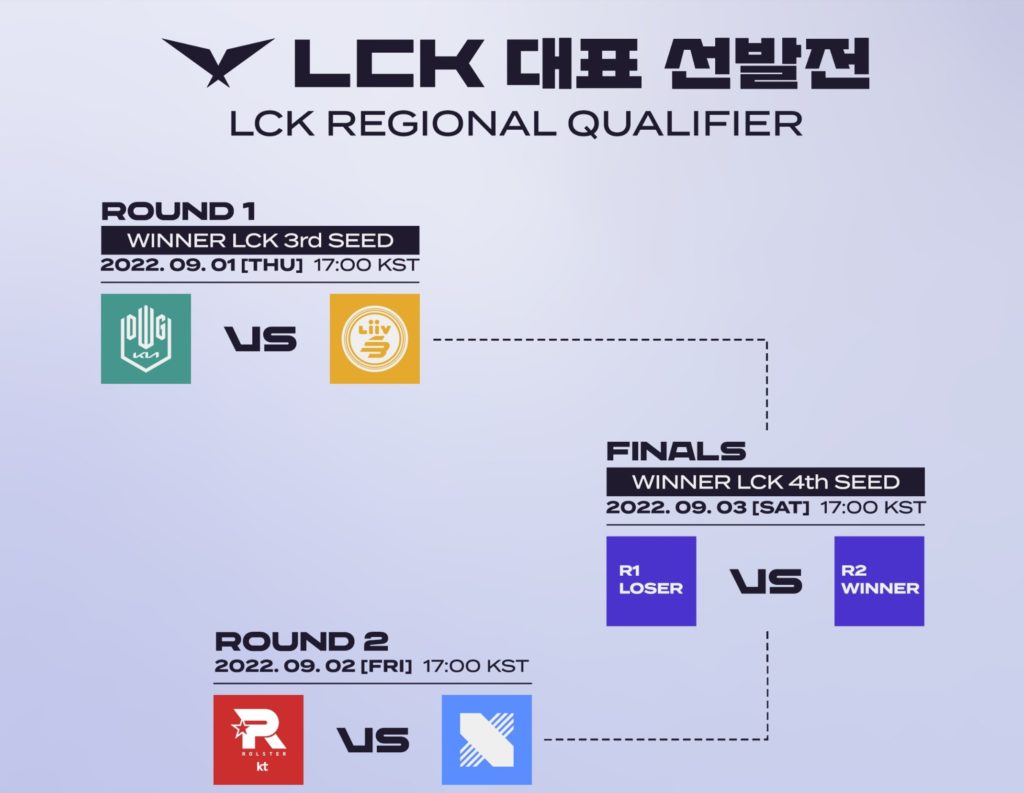 DWG KIA and Liiv SANDBOX will open the Regional Qualifier on Sept. 1, while KT Rolster and DRX will follow up with their match the following day. The winner of DWG KIA vs. SANDBOX will qualify for the group stage of the World Championship no matter what, while the loser will have a chance to qualify for the play-in stage against the winner of the tournament’s follow-up match between KT and DRX.

On Sept. 3, the remaining teams will go head-to-head with Korea’s final berth at Worlds on the line. The team that wins will have to settle for the play-in stage of Worlds before reaching the tournaments top 16.

The play-in stage of Worlds begins on Sept. 29 in Mexico City, while the group stage will kick off on Oct. 7 at Madison Square Garden in New York City.