Here are the matchups and bracket for the 2022 LCS Championship

North America's finest are ready to battle for glory.

The 2022 LCS Summer Split might be coming to a close, but the competition is just starting to heat up. The league’s playoff bracket has been locked in, with eight rosters preparing for battle in the most exciting part of the split. In the end, however, one team will lift the LCS trophy, and only three teams will get the chance to represent the region at the 2022 World Championship.

The first round of the postseason is set to begin on Saturday, Aug. 20, and will feature four best-of-five series between the various hopefuls. From Team Liquid’s veteran superteam to Evil Geniuses’ explosive youth movement and 100 Thieves’ next heist plans, there are plenty of different teams that fans can support moving forward. 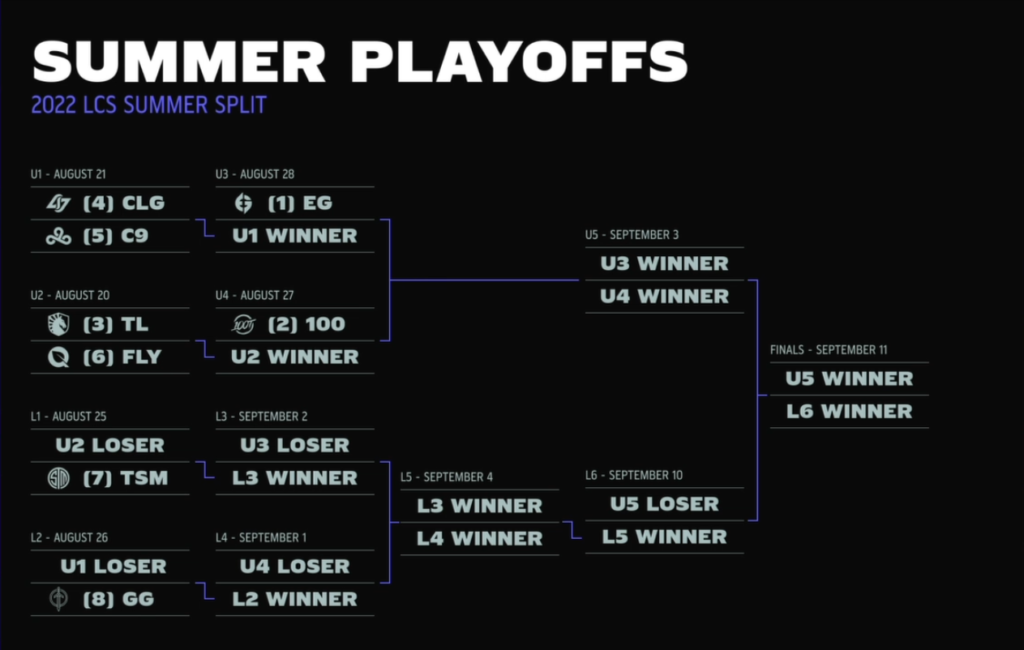 The playoffs will kick off with third-seeded Team Liquid facing off against the sixth-seeded FlyQuest, with the winner continuing forward in the upper bracket to take on the second-best team in the league, 100 Thieves. In parallel paths, Counter Logic Gaming and Cloud9 will clash the day after to decide who gets to face off against Evil Geniuses in the second upper bracket matchup of the tournament.

From Aug. 20 to Sept.10, the 2022 LCS Championship will rage forward until the culmination of everyone’s blood, sweat, and tears at the Grand Finals, which will take place on Sept. 11 at the United Center in Chicago.