A new metagame is upon us.

A new round of Hearthstone balance changes is upon us. An unexpected patch appeared with less than a days notice today, featuring many card nerfs in Constructed and a couple of smaller changes in the Battlegrounds and Mercenaries game modes.

The aim with this balancing round in patch 23.4.3 is to bring down the overall power level of the metagame, Blizzard Entertainment said. To that end, the developer nerfed multiple cards from two of the most popular decks in Standard alongside a few other standout cards.

A whopping four Warrior cards were nerfed in the 23.4.3 patch, all aimed at the dominant Control Warrior archetype. Shield Shatter now only deals four damage instead of five, and the mini-sets Tidal Revenant only gives five Armor instead of eight as part of its Battlecry effect. The Warrior Colossals smaller part (Nellie, the Great Thresher) only gives a one-mana cost reduction on each of the Pirates rather than outright reducing their cost to one, and From the Depths now costs four mana instead of three. 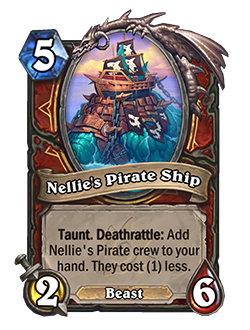 The developer comments for these changes note that the team is looking to lower the power levels of both the regular Control Warrior and the Charge Warrior builds as well without outright removing them from the metagame. The team also wants to remove the brutal burst potential of Nellie and Mr. Smite.

Demon Hunters also got hit: Caria Felsoul is now a seven-mana 7/7 instead of a six-mana 6/6, delaying certain power plays in slower Demon Hunter decks with the buffed Xhilag. Battleworn Vanguard has also been reduced to a measly two-mana 1/2, greatly reducing its snowball potential.

Some other overperforming cards were also adjusted. Wildpaw Gnoll is back to a five-mana 3/5 in Rogue, Paladins Lightforged Cariel is now an eight-mana Hero card and Naga Mages key Spitelash Siren now costs five mana instead of four. Druids Earthen Scales has been nudged up to two mana and Lightning Bloom has been reworked to Refresh 2 Mana Crystals rather than Gain 2 Mana Crystals this turn only for healthier play patterns in Wild.

Powerful Neutral cards were also adjusted. Mr. Smite now costs seven mana, greatly impacting its finisher potential. School Teacher is also down to a four mana 4/3; like the developer comments suggest, there was little reason for a card with this powerful an effect to come with vanilla stats.

Multiple Heroes and minions were changed in the latest Battlegrounds patch as well. Four Hero Powers were updated. Onyxia Broodmothers passive effect now summons a 3/1 Whelp instead of a 2/1, and Pyramads Hero Power now costs zero mana and gives two health and upgrades by +1 health for each turn you dont use it. Tamsin Roame now gives the stats of the destroyed minion to five friendly minions instead of four. Ozumat also received a text update, but it isnt a functional change.

The patch also adjusted some of the Armor tiers on certain heroes:

Multiple minions were adjusted as well, with some of the Naga nerfs apparently reverted or re-adjusted in light of the new metagame. Shoal Commander is back to a 2/2. Waveriders Spellcraft spell now gives +2/+2 and Windfury. Critter Wrangler is a 5/7 and gives +2/+2 for each Spellcraft spell. Corrupted Myrmidon starts as a 3/3 and Tidemistress Athissa went from a 7/3 to a 7/8.

Bubblette is now a 5/4 instead of a 2/5. Tarecgosa was moved back to Tavern tier three along with Coldlight Seer.

Rexxars maxed stats went up from 11/72 to 11/82 in the 23.4.3 patch. Also, a couple of abilities received changes to their Speed and Cooldown stats:

Latest comments
No comments yet
Why not be the first to comment?
Featured news
Hearthstone19 hours ago